Welcoming the Newcomer – A lesson from the barnyard 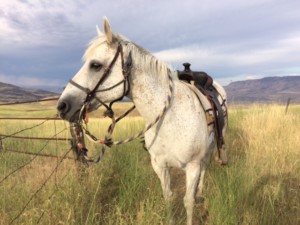 Kit is the newest member of the Timber Butte Homestead community.  She is a 12 year old mare; a gift from our friends Michelle and Franck.  When Michelle first made the offer for Kit to come to the ranch I frankly wasn’t interested. Kit is a mare and I knew her presence here would disrupt the peace we’ve been experiencing. Horses are like people and often the introduction of an outsider entering an established community is perceived as an unwanted threat and in the horse world, mares are notoriously the worse when it comes to establishing peaking orders. We already have a mare named Cayenne, short for Cayenne Pepper, who notoriously lives up to her name.  You can depend on her becoming overly snooty and antagonistic with any new comer.

For the first two months I kept Kit in an isolated pen separate from the other horses. I worked with her nearly every morning and she adjusted quickly to her new environment and bonded to me.  Because of her gentle spirit and love for people she liked to hang out on the front lawn without the need of being tethered, yet her natural instinct continually stirred a longing for relationship and acceptance with the other horses. 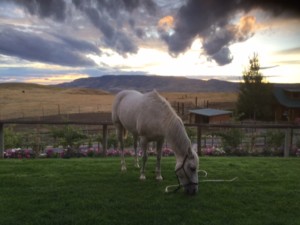 Kit liked to hangout on the front lawn untethered

I slowly introduced her to the horse’s one at a time then turned her out into the open field with the whole gang. It was the safest place for her first one on one meeting with Cayenne. In the large pasture she had open space to run freely evading a close physical confrontation.

Peer pressure and the quest for social status is not a dysfunctional characteristic of the human race alone. It’s been my observation that all animal behavior becomes threatened by unknown outsiders. It’s a tribal matter. Like humans, most farmyard animals resist anything or anyone that threatens the safety and security of their established communities. It is human and animal nature alike to fear and resist the potential disruption of status quo norms.  In our uncertainty we find others who share our common anxieties enabling us to join the crowd and corporately pushing back on those we don’t understand. In the same way, all of the horses joined Cayenne in Kit’s fraternal initiation.

The chasing, biting, kicking and squealing went on for several days…

The chasing, biting, kicking and squealing went on for several days forcing Kit to be segregated and live on the outside of the established click until one day Cayenne came walking to the barn head held low with a painful limp. An examination revealed a perfect imprint of a hoof on her right shoulder. Kit had had enough, stood her ground and demanded respect. It was over then. Things changed from that day on. Kit had become an accepted member of the Timber Butte community, but not without everyone experiencing a lot of unnecessary pain and anguish.

Is there a deeper message?

It’s no easy task achieving harmony in the barnyard. Every working homestead is made up of all kinds of diverse species; poultry and livestock for laying, eating and breeding, all in a multitude of color and sex, and all with different agendas, disposition and purpose.  Harmony and peace, in any farmyard occurs only after inner fears subside, new behaviors are learned and acceptance and tolerance between species override aggressiveness and self protection.  Dogs and cats become disciplined to suppress their natural instincts to chase, catch and kill poultry, newborn lambs and calves.  This transformation doesn’t come easily, however,   when harmony does occur daily life on the farm has a lot less stress and grief. When animals learn to cohabitate, living without prejudice and segregation, pen gates are opened and the freedom to range can be granted.

The barnyard is a picture of the world we now find ourselves living. Unfortunately however, it is a world filled with paralyzing fear, some founded and some not.  It is a world that fears those they don’t understand, stereotyping the immigrant and stranger as aggressors and a threat to entitlement. In this kind of world all Muslims are perceived as terrorists, Mexican migrants as evildoers and people of a different color as suspect. It is an increasingly fearful society becoming convinced that the newcomer is destined to undermine national security, rob employment, create violent gangs and blow up assemblies. In this kind of world it makes sense to protect through isolation by building walls, not merely closing aggressors out, but closing ourselves in, just as the farmer closes off the chicken’s run. As it is in the barnyard, opening hearts and welcoming the stranger is contrary to our sinful human nature.

Like in the case of the mare Cayenne, human fear and the desire to aggressively control becomes contagious throughout a culture and mean-spiritedness promotes social segregation forcing isolation.  And, as it is in the barnyard, where there is no quest for harmony, freedoms are lost,  chicken become re-penned, the dogs are tethered on chains, the farmer becomes motivated to rule with a stick and the rule of tyranny is embraced by all. There’s a lot to be learned from the barnyard; if only we will before it’s too late.