Growing a thriving garden in the country is always a challenge when all around there are so many adversaries wanting to help themselves to its produce.  That has always been true here at Timber Butte. Right from the first it was a war zone against every kind of critter and insect you might imagine.  First it was the elk and deer. We knew from past experience they could “leap tall buildings in a single bound” and in so doing, wipeout an entire vegetable crop in a matter of one night. Knowing this we constructed a 10 foot fence as a defense barrier before planting anything.  Gophers and ground squirrels were enemy number two. They also can do a world of damage in very short order if it wasn’t for the two foot barrier of 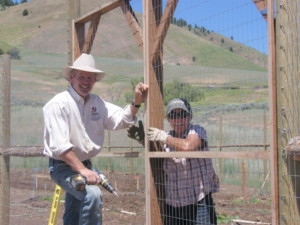 We constructed a 10 foot fence before planting anything in 2008.

corrugated steel which we used to surround the base of the fence line. Corrugated steel was also an effective deterrent for rattlesnakes that occasionally tried to slither in looking for a cool spot to hangout during the summer heat.  The greatest menace of all however, has been grasshoppers. Some years they come in such swarms it feels almost apocalyptic; like a biblical plague. Many of our neighbors don’t even attempt to plant vegetable gardens after so many discouraging experiences while others resort to government programs which supply free 50 lb. bags of poison pellets for farmers and ranchers who struggle with the problem. 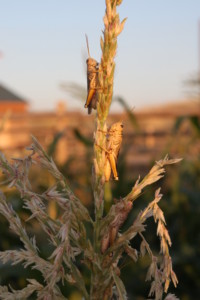 The greatest menace of all however, has been grasshoppers.

Nancy and I depend on the productivity of our garden. Because she dehydrates, freezes and cans our family can eat from it year round. All this to say we had to come up with a viable solution that was both organic and cost effective. Nancy had become deeply distressed with the problem. I watched as she began to change personality from a calm, gentile, kind person to a wild almost crazy woman in the garden. She often shouted at the pesky hoppers, chased them down, whacking them with various garden tools and maiming them to a point that they could not escape the ecstatic chickens following her around with glee. She started calling her garden “The hope deferred makes the heart grow sick garden” (Proverbs 13:12) quoting scripture to express her outrage.  It got so scary I knew we had to find a solution. One day out of total desperation I heard Nancy talking to God in a rather loud voice. I’m still not sure if it was prayer or cursing, but I think the Lord knew her heart and sure enough an answer came to her one night in a dream. 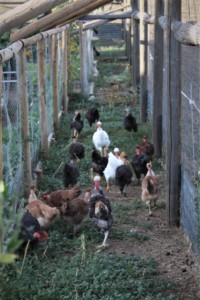 ...in her dream she saw a chicken run about 4 feet wide along the inside of the garden perimeter fence as a form of defense against the invading insects.

That morning she told me about the vision she had received during the night telling me we needed to build a “chicken moat” around three sides of the garden. “A chicken moat”, I said. “What in the world is a chicken moat”? I had always thought of a moat as a wide body of water around a castle as a form of defense.  She explained that in her dream she saw a chicken run about 4 feet wide along the inside of the garden perimeter fence as a form of defense against the invading insects. Most of our chickens are free range and we had observed how effective they were at running down grasshoppers out in the open pastures. Once we had allowed them to run in the garden knowing that they would do some unwanted damage to the beds and vegetables but thinking it might be worth the loss if they would contend with the grasshopper population. In the end we concluded it wasn’t a viable solution. So, in an act of obedience (more than an act of faith) I went out and began construction on the chicken moat she had envisioned. 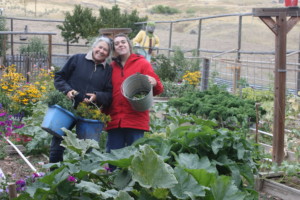 Nancy and Hope (our oldest granddaughter) celebrate the victory

Every year we raise about 30 to 40 meat chickens. We raise them in a large chicken run which is attached to the west side of the garden fence. We had noticed how effective a barrier it had been as grasshoppers rarely managed to make it to the garden on the opposite side without being consumed by the aggressive meat birds. The new chicken moat became an extension of the existing pen as it wrapped all the way around to the other side of the garden.  By doing this we solved two problems. First, the meat chickens effectively chased down grasshoppers keeping 90% of them from making it through to the garden, and second, our feed bill came down because the young birds filled up on grasshoppers and ate less commercial food. We always purchase our new batch of chicks every year in the late spring before the grasshopper season really gets started. By the time the chicks mature enough to leave the brooder the grasshoppers are just starting to gain momentum.  We raise the chickens through the summer into the fall just before the first freeze when the grasshopper population dies off naturally.

Nancy’s Chicken moat has been a success for the last seven years as her dream came to fruition and to my relief her sanity returned as her garden thrived under the new chicken patrol.