This month I have turned 74 years old. All of my life I have had a love for horses. Since my early 20’s I’ve never been without a good saddle horse and most times at least one working team capable of pulling carriages, wagons and various farm implements. About six months ago Nancy and I agreed that it would be a good idea to find and purchase one last “forever” horse. A horse that I could train and ride until I was too old to reach the stirrup.  That’s when we found a 3-year-old colt named Cash. Cash is a black paint with only a little white on his face and feet. He had been named Cash by his previous owner because of his color (after Johnny Cash), but we kept his name because he cost us so much of it. 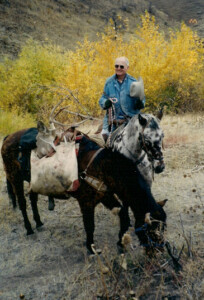 Cash is young, and although he has had lots of good training both in the arena and on the open range, he is still young with lots yet to learn but he is the smartest horse I believe we’ve ever owned. He has a disposition and willingness which enables him to learn new skills quickly.

My dad was riding in the hills, packing and hunting with me into his late 80’s. If I could follow in his footsteps, it is possible I could be using Cash for quite a few years to come.