Building a Lasting Heritage in a World Unraveling 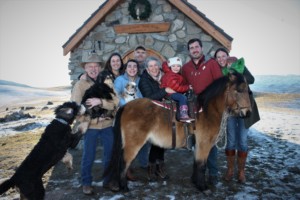 Our world has entered a season of increasing upheaval, conflict and crises and as I ponder the uncertainty of our future I conclude there are priorities I must pursue if I desire to build a lasting heritage and a righteous legacy for my children and my grandchildren in such a changing culture.  Like so many, I find myself fighting feelings of helplessness as I watch our nation experience such extreme polarization and political division and can’t help but recall the words of Jesus when He said, “Every kingdom divided against itself is laid waste, and no city or house divided against itself will stand”. There is no question in many of our minds; we have become such a nation. As a people we have never been so divided since the Civil War and our weapon of choice is incivility. We fight with anger, intolerance, arrogance and hatred towards those we perceive as our enemies when in truth we are all called to be Americans. Too many today define themselves by their political party seeing those in an opposite camp of ideology as the enemy. Even then, Christ called us to love our enemy not call them sarcastic names.  We have lost our way, and if not corrected we will be a “kingdom that will not stand”.  Knowing and believing the words of Jesus myself I fear the credo statements, “Make America great” and “America first”.  Jesus said, “The first will become last”, and “The greatest will become the least”. All of this gives me deep concern for the direction our nation is headed, but in the midst of my fearfulness I can also see a silver lining even considering that as the Apostle Paul said in Romans’, “All creation is groaning”. Again, it is no secret that the entire globe is facing new and potentially devastating challenges in the arenas of  a warming planet causing accelerated climate disaster, drinkable water shortages, quality food insecurity and pandemic health.   For me, the silver lining is the fact that unless we come to see our need for God’s intervention we as humans have a tendency to be satisfied with the status quo and do nothing.  From personal experience I find it takes the reality of crises in my life to force me to my knees and ask God, not only for His intervention, but what I can do to promote lasting change. In the midst of it all I have felt a conviction to pursue three priorities for the sake of my family; to rest in the assurance of my faith, to strengthen the bonds within my own family and to embrace my local community even if our political ideologies and expression of faith may differ.  For me I believe only then will I be able to establish and leave behind a true lasting heritage and a legacy of righteousness and justice. 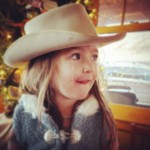 A few weeks ago Nancy and our four year old granddaughter, Ella put on boots, coats and hats to venture out to the chicken coup on a stormy winter day. Ella had outgrown the hat she normally wore while here at the ranch and went in search of one that might fit among many hats that hung on the coat rack. The hat she chose, and the only one which fit her growing head, had belonged to my great grandfather. It was a special hat that had been passed down for nearly a hundred years from the man we called Granddad Gould.  It was an original “Stetson 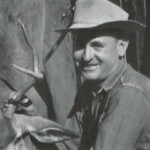 Ranger” but remains in surprisingly great condition. My father had inherited the hat as a young man and I remember as a small boy seeing him wear it with pride while riding or hunting.  Because my head was larger I had never worn it myself but had kept it in a safe place because of its history.  The morning I saw it on Ella’s head it struck me how amazing it was to see her using something once belonging to her great-great-great-grandfather.  I said as much to Nancy and all the family who had gathered here at the ranch for Christmas. It struck me then how important and rich it is for a family to possess a lasting heritage. 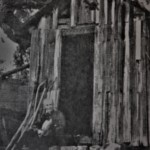 Granddad Gould with the original Stetson in the 1940’s

Most ranches and family farms across America have been lost to corporate agriculture and commercial development.  Shortly after WWII many American families sold out the family farms for what they saw as a better way of living. Many moved to the cities and suburbs, selling the old family acreage in hopes of a more lucrative way of life.  Families often became disjointed and separated losing something of deep value. More than the land (which in many cases had been in their families for generations), they lost the ability to establish heritage together. More and more I see many trying to regain what was lost only to discover how hard it is to acquire not just the land to do it on, but the shared vision among parents, children and grandchildren to build something of importance together.   I believe one of the greatest privileges Nancy and I share here on Timber Butte Homestead is our family’s ability to have such a desire and vision. Timber Butte has become a family affair. 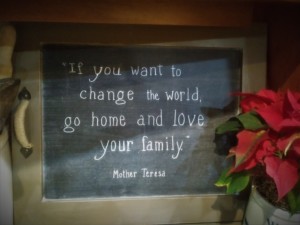 One of Nancy’s and my favorite television programs is now the longest running series in Canadian history. It’s called “Heartland” for any who would like to check it out. Heartland has been aired for over twelve years using the same basic cast. “Heartland” is the story of three family generations working together on a 600 acre horse and cattle ranch in Alberta, Canada. It’s the story of how a family struggled to hang on, working together on a valued piece of land which had been in their family for several generations. The story illustrates, not just life on the farm, but more so, the ins and outs of working out family dynamics during good times and bad. We value this because it addresses the reality that every family struggles with conflict but for those who persevere those conflicts can be overcome.  For any who might desire what we are endeavoring to do here on Timber Butte, it is a must watch. 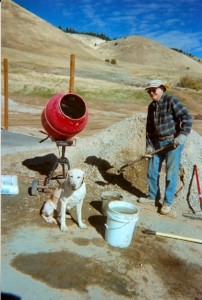 One of the last things my father did was to help pour the foundation on the barn.

One of the last things my father did before his Alzheimer’s took a serious hold on life was to help pour the foundation on the barn. The barn was the first structure we built here on the ranch and I’ll be forever grateful the Lord gave him the energy to have even a small part in the development of Timber Butte before his death. After he was gone we brought my mother home to spend her last year with our entire family around her. Four generations had gathered during that year. More than once we gathered around the dining room table, laughing and eating farm to table dinners sometimes sharing a glass of Timber Butte wine. Although she suffered with dementia she fully enjoyed farm life helping Nancy in the kitchen garden and even caring for new born animals.  Mom died here in her own bed with children, grandchildren and great-grandchildren around her.  Our experience with being intimately involved in the last days of our parents’ lives are a reminder to people like Nancy and me of just how short life is and how key family relations are all the way to the end. 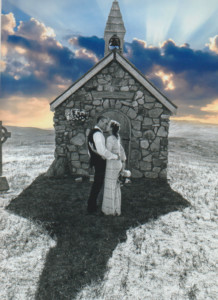 Kate & Todd were married by the chapel on the hill overlooking the ranch.

When our daughter Kate and her long time boyfriend Todd decided to get married they wanted to do it here on the ranch. It wasn’t totally because of their wedding, but I’d have to say it was a huge motivation for us to build the chapel on the hill above the ranch. We also remodeled the barn for the wedding reception so that friends and family could celebrate the event together at a sit down dinner. But, besides the wedding which was wonderful, the chapel provides us with a place to gather for communion services and for personal prayer. Spending time seeking God for insight and prophetic understanding concerning the condition of the world and, for knowing what to do about it, enables us to break free of the fear of cultural and political conflict and become assured that none of it is catching God by surprise.  Not only that, but in the case of our family, it is our common Christian faith which enables us to forgive, have grace and embrace each other more than any other thing.

Surprisingly, Timber Butte Wine has been another motivation for our

family to grow closer here.  In 2013 our kids came to us with the proposal to plant a vineyard. We knew nothing about wine production and Nancy and I had little interest, but because of their enthusiasm we purchased our first 50 vines and planted them on a south facing slope below the ranch house. To our amazement the grapes not only survived the first winter, but flourished in the Timber Butte climate and soil.  Our son Brook took the role as winemaker and I became the lead vintner. Everyone took responsibility and participated in one way or another.  This has not only drawn our family closer but as the vineyard grew and the work load increased many friends rallied to our cry for help creating a community of harvesters.   What became known as the 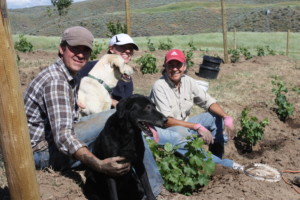 We planted our first vines in the spring of 2010…

“Timber Butte Harvest Party” soon became a tradition.  Winemaking drew more helpers to the harvest. People of all ages and with diverse political and cultural ideologies started showing up and as the community grew, so did the quality and reputation of the wine.  Somehow I believe what we were doing pleased the Lord and because of it, He seemed to bless our efforts working together. Living in cattle country has also given friends from around the area a reason to call on each other for branding and moving cattle. There are things none of us can do alone well and it gives us joy to lend a hand when needed.  It reminded me of barn raising in communities of the early west, which still happen especially among Amish communities.  It also reminds us of how much joy can come from it. I think it was the Amish who inspired the words, “Many hands make for light work”, but I might add, many hands working together makes for a much more meaningful, joyous and richer experience.  It’s always nice to 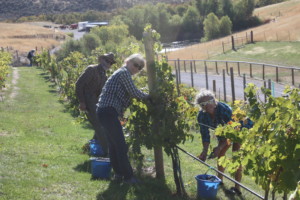 feel like you are needed.  And so, as I said before, in order to thrive in the season we find ourselves now in the priorities we must pursue will rest in the assurance of our faith, the strength of our family bonds and the uniting of our local communities even if our politics and ideas concerning faith might differ.  Only then will we establish and leave behind lasting heritages and legacies of righteousness and justice.