Sustainability – More than an idealistic lifestyle 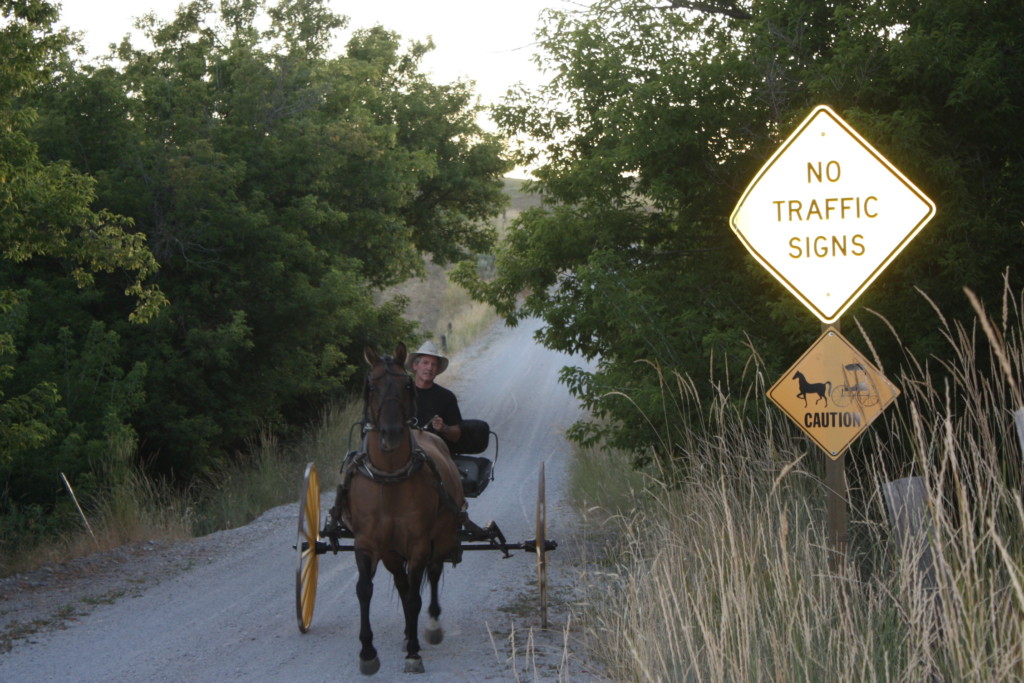 Attempting to live a fully sustainable life on a planet with a population approaching eight billion people may be an impossibility, but it’s still an ideal worthy of pursuit. Total sustainability infers living a self sufficient life without external support. One definition is, “ to live a lifestyle that dramatically reduces an individual’s use of the earth’s natural resources, living self sufficiently in harmony with creation”.

Do we have to go back to move forward?

Most American’s, if they want to admit it or not, find themselves fully dependent on modern technology, a monetary system, water and power grids, a minimum of a once a week visit to the filling station, medical support, Amazon, Home depot and Costco. For most of us, it’s just the way it is.  If any group has become remotely close to a sustainable life it might be the Amish community, but even they are finding it increasingly more difficult to stand alone. There was a time in the very early days of pioneering and homesteading when some, out of necessity, lived almost totally off the land. They came west during a season when wild game was plentiful, land was free for the taking and the natural environment was pure. In today’s world, for those of us who do desire to live more sustainable lifestyles, our goals are not lofty. they are simply an attempt reducing our carbon footprints by using renewable sources of energy, producing the majority of the food we eat, developing efficient watering systems and taking good care of the land we have the privilege of stewarding . It’s our goal to become less dependent on the world system, to live simpler and more wholesome lifestyles. 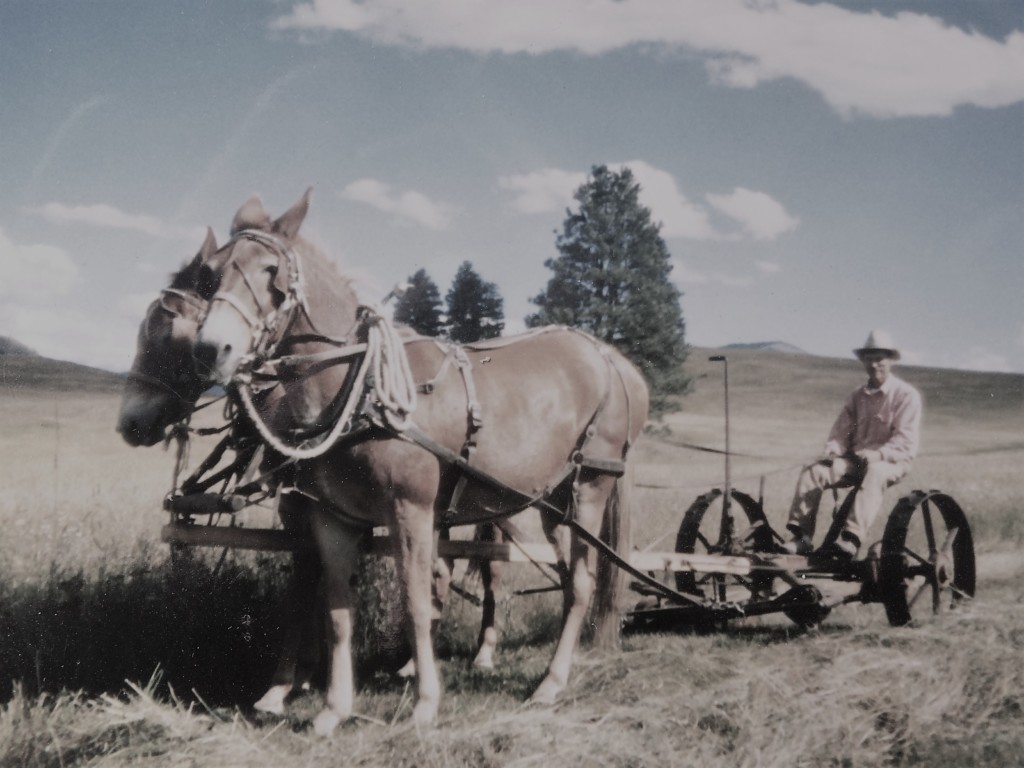 Is it necessary of us to go back in time in order to move ahead into lives of sustainability & simplicity? I’d say yes and no. There’s good things about the past; no question, but we can also use modern day technology for our advantage. For example, new sustainable methods for energy production such as solar panels, wind turbines and Lithium battery storage systems have taken quantum leaps in the past few years. The idea of going back to horse and mule power is a romantic thought, but for most folks not a practical one. I can think of two big reasons for this; one, horses require fuel the same as tractors do. Unless your home or farmstead has plenty of self generating pasture grass, the production of hay is expensive and could be more practically used to raising sheep or cattle. Secondly, driving draft animals takes skill and requires harness and specialized farm implements. Draft equipment is often obtained by way of refurbishing antiques or purchased from Amish outlets. Heavy duty leather collars and team harness is not only expensive but the use of them requires both acquired skill and extensive experience if one’s to be safe.  Saying this, I still use my horses for some applications around the homestead and find it enjoyable and rewarding and sometimes even practical. For me it’s been worth the effort, but not without some pain and frustration along the way. Years ago on our families original ranch I discovered 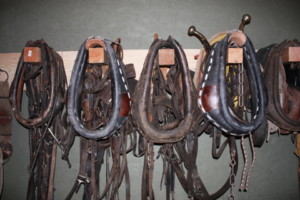 my great grandfather’s old team harness in a sealed wooden keg in an old abandoned hog shed. Before he left the ranch back in the ‘40s he had soaked his harness in oil and stored it away. I found it nearly forty years later when I was in my late twenties and decided to see if I could figure out how to use it on my saddle horses. Over the course of the next few years I nearly killed myself and my horses more than once, but in the end found an old timer who gave me pointers in the lost arts of driving buggies, wagons and using equipment without incurring extensive bodily damage. Maybe I’ll write a future blog sharing the process I endured but for right now it’s off the subject. 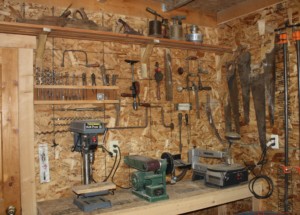 In addition to hanging on to my great grandfather’s harness, I also kept hand tools inherited from my farther and my great uncle Floyd. They were the tools we used to build things on the old ranch before we had electricity. To this day I still have them hanging on my shop wall to remind me how we used to do things, and also, just in case the power goes off sometime in the future. As great as the memories are of those earlier times, I am grateful for my modern wood and blacksmith shop now. Nancy has many of her old tools as well; the treadle sewing machine she once used to sew the kids clothing when they were young, the gasoline fueled iron she used to press them, the wood cook stove and a plethora of kitchen tools which were once a necessity in our former life.  It’s nice to know we could go back if we had to, but nicer still to have a modern kitchen, shop and some efficient farm equipment.  So – the answer is – unless things on planet earth get really difficult – no, you don’t have to go back to move ahead into sustainability, but at the same time, it’s nice to know you could if you 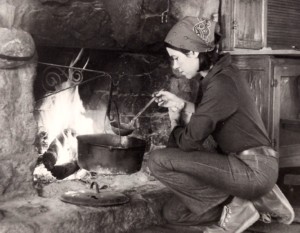 Nancy cooked on the open fire in the old ranch house fireplace.

found yourself in a position where you had to.

We as Americans, in the last hundred and fifty years, have rarely had to endure long seasons of extreme hardship. We have become accustomed to having our lives carry on without too much interruption with the exception of events such as WWI, WWII or some rare catastrophic weather calamity.  In recent months however we have become acutely aware of the readiness of our advisories preparing cyber attacks capable of shutting down American communication, power and water grids. We are recently facing the international potential of trade wars which threatens commercial food production. We now are facing the new reality of prolonged drought, flooding and catastrophic weather events resulting from a rapidly changing climate. Most are aware that our fossil fuel industries are resorting to fracking in efforts of keeping the American oil spigot open for awhile longer. These harsh methods of extraction are being conducted at the expense of threatening underground freshwater aquifers. As the Apostle Paul said in Romans 8, “All creation is groaning…” The world is having a hard time these days supporting an unsustainable global population and is crying out for nations to participate in worldwide efforts to curb climate change and efforts to move towards renewable energy sources. As nations heed the call they are forced to bring regulations and mandatory requirement to their citizens. Sustainable living is not only a good idea in today’s world, but is rapidly becoming an issue of national security and survival.  For Nancy and I, living here at Timber Butte, we have made efforts over much of our married lives to become as sustainable as we can be, not for national security or even survival reasons, but because we believe it is a better more responsible way to live.  By doing so, we eat healthy organic food, drink pure water, breath cleaner air and enjoy a rich and natural lifestyle.

In our discussion on the pursuit of a sustainable simplified life we will look at several relevant issues in our upcoming blogs: Sustainable food production, Sustainable energy systems, water system development, bartering vs. buying and the importance of community. Hope you will stay with us.