Changing of the Season in a changing world 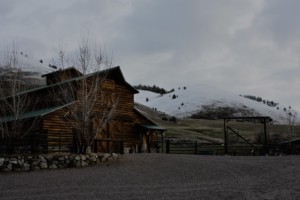 We woke to a fresh skiff of snow on the slopes of Timber Butte this morning. The air had a brisk bite and the animal’s water, a thin skim of ice. No surprise in November, but a reminder all the same that the climate here is in a state of change. In expectation of a new season coming the fall has been a time not only of anticipation, but preparation; the garden and orchard were harvested, processed and stored away in the cellar and freezer. Fire wood was cut, split and stacked undercover. Hay was put up in the hay barn. Grapes were harvested, pressed, fermented and stored for a year of ageing. The previous year’s harvest was bottled and labeled just in time for the Thanksgiving table.  Last year’s lambs were butchered; turkeys and chickens were processed for the freezer. Water pipes were blown out before the first deep freeze and chains were wrapped on the tractors tires before the first deep snow. For the country-liver, fall is traditionally a season of hard work so that winter might be a season of greater tranquility and rest.

As winter now approaches the sound of the fire crackling in the stove has replaced the whine of the chain saw, and the dehydrators which worked around the clock for the better part of two months. Now the smell of Nancy’s soups and stews permeate the air as more of our time has been moved indoors. Even the wildlife is visibly responding to the coming seasonal change. On a daily basis we look up onto the butte seeing herds of elk and deer frequenting the open slopes inherently sensing the threat of a hunter’s bullet has passed. 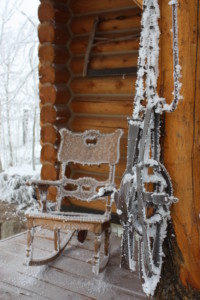 The air had a brisk bite…

For us, winter is a season of greater isolation and solitude.  For me it’s a time to slow down, contemplate and write; a time to think and dream about things of seeming importance. Today, I think about a changing season; not from fall to winter, but of our changing world and a culture in flux.

Being a child of the 60’s I am reminded of the old Dylan song, “The Times They Are A-Changin” and wonder if he knew how much it would change in his lifetime when he first wrote the lyrics so many years ago. Times where changing in the 60’s, there’s no question, but it can’t compare to the flux we are feeling in our present day. We, as the Baby Boom generation, had great fears in the 60’s and 70’s, fears that now have become the norm of a new reality. In the 60’s we feared our world’s population could reach eight billion people in our life time and as a result our planet would become unsustainable for nature and humanity.  It is sobering to understand that when the average Baby Boomer was born the world population was less than 2.5 billion people and that by 1970 (the time in which Dylan wrote his song) the population had already doubled reaching 5 billion. Now, in 2017 it has climbed to 7.6 billion as most Boomers enter retirement age. This fact alone influences a growing crisis the Millennial generations must face as young adults. They are already being confronted with a world facing serious issues such as food security (quantity and quality), clean and drinkable water sources, human migration and immigration due to the escalation of extreme human injustice and a rapidly changing climate. These are merely a few of the issues forcing entire populations to seek out places of refuge to reestablish their lives both in and out of their own lands. These are global crisis’s requiring a unified global effort for solution in a world that is rapidly turning to isolationism for survival.

Where is the hope?  Are there answers or solutions to the problems we face? I believe there are, and as for myself, I believe those answers will only be discovered through the avenue of authentic faith. I do not believe they can be answered through human reasoning, knee jerk reaction or the debate of ideologically polarized politicians. Our world needs an authentic relationship with the one who created it and not through religious systems which have made political agenda a higher value than becoming a living expression of God’s heart.  I speak of a heart broken for a broken world; a people who can and will see beyond their own personal fears, entitlements and desires to the crisis that’s before them.  I speak especially of a new generation that will actively engage on the front lines of suffering humanity rather than choose apathy, denial and the pursuit of global isolation. If America has been known as a country with Christian values it is because it’s had a reputation for reaching out to the world’s poor and destitute in benevolence and mercy, not because it has looked out for number one. These are the values God honors and the values I prophetically believe the Millennial generation will one day reclaim. I believe they will be the generation to rise up against the present political climate of our nation that is now breeding disunity, fear and hatred towards the outsider. I believe they will be the generation which will rise up in protest, much as their grandparents did in the 60’s, and once again bring back the favor that had once made our nation great.  It is my hope – It is the hope.

The following are the closing words in the book “Re:Form – The Decline of American

Evangelicalism and a path for the new generation to Re:Form their faith”:

I see the cloud “rising”

It is time to see what’s so clearly on the horizon. The cloud is rising and with it a people rising to become a powerful expression of God’s love in a time when the culture is ripe and ready to receive it. The cloud is rising and though much of the present-day church will probably miss seeing it, some won’t. God will take the remnant that are diligently looking and waiting and use them as His servants in a divine and amazing season of spiritual awakening.  The culture is becoming ready, the cycles of history have given us previews of His coming attractions, and for those who are watchful of clouds, they can be assured an end of the age move of God is on the near horizon. As the cloud rises, so will those who God will use to lead the way.