The Life and Times of Jacob – A story of destiny 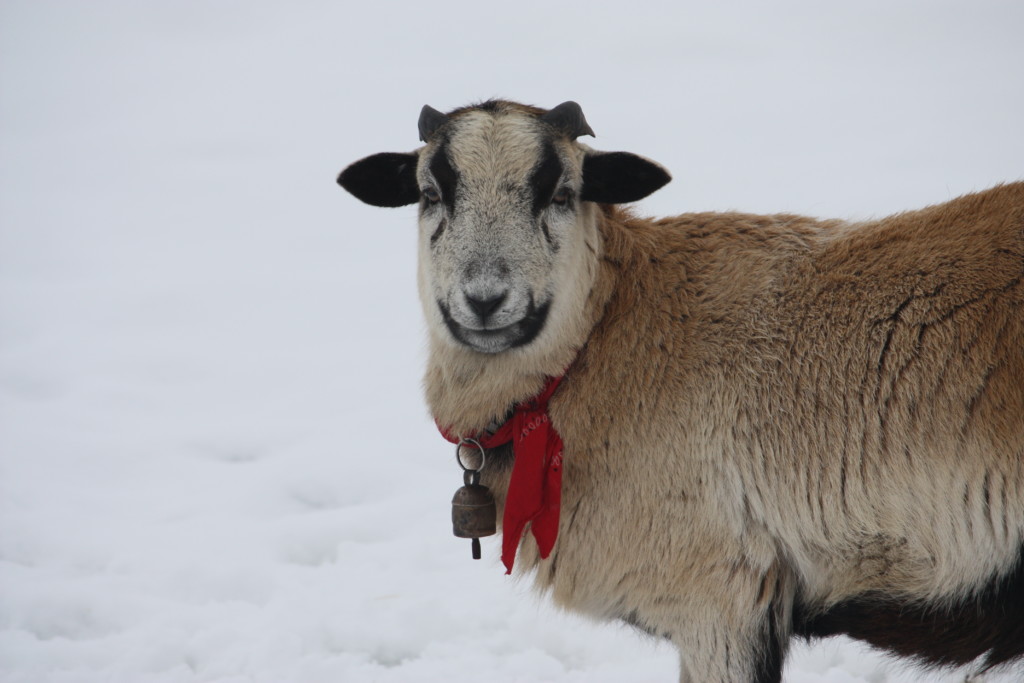 When people meet Jacob for the first time they often become confused. Some think he’s a goat because he has hair instead of wool while others wonder how he could be a sheep saying, “Sheep don’t chase cars or stand on their hind feet begging for treats – dogs do that”. Jacob is a Barbados sheep, but unique for his breed. Barbados sheep have reputations for being illusive and shy around humans acting more like domesticated deer than sheep. His uniqueness is likely a result of his unorthodox upbringing.   Jacob was born on a cold rainy spring day nearly four years ago. He was a runt so small and week his mother, as hard as she tried, couldn’t get him to stand on his feet, eventually leaving him to die in the wet grass.

The morning Jacob was born I happened to look out an upstairs window just in time to see his mother drop him to the ground while giving birth to the first of two twins.  I watched as she diligently licked and nuzzled him in an effort to coax him to get up. He made several attempt’s to rise and then lay lifeless as his mother turned away giving her full attention to his stronger sister.  I walked to the pasture for a closer look. 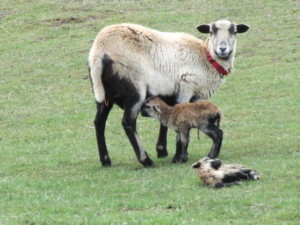 Jacob was covered in afterbirth struggling to breathe.  Seeing his small body limp as a rag I was confident he was beyond help, yet not having the heart to abandon him I gently picked up his lifeless body and carried him back to the house and to Nancy.

Nancy laid him beside our cat Max for warmth. Max was in his usual place sleeping in a chair beside the fire. Lily, our Lab joined the rescue effort taking over Jacob’s mother’s job of licking him from head to foot, cleaning the residue of afterbirth which helped stimulate  circulation. Nancy mixed powdered lamb colostrums (mother’s milk) and attempted to force feed him with a bottle. Jacob was too weak to suck on his own.  For the next 24 hours the verdict was out if Jacob would live or die. That night Nancy slept on the living room floor keeping Jacob warm and forcing him to ingest milk on the hour. It was a miracle that Jacob survived that first night, but after so many hours of loving care he did and in the process his little lamb brain became imprinted on a new family. He grew stronger day by day, and as he developed it become clear; Jacob’s life was destined to be one with a very unique identity. 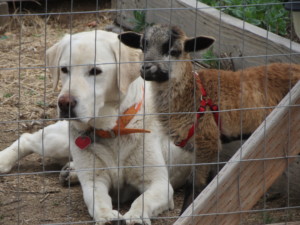 Jacob not only began to nurse from Nancy’s bottles on his own, but eagerly craved them. He soon started to gain weight and became a rambunctious playful lamb. Nancy put him in the smallest infant diapers she could find which allowed him the freedom to join Lily and Max having the run of the house.  Lily became his first playmate leading him more than once into mischief. Jacob discovered how much fun it was to grab the end of a toilet paper roll and run from room to room effectively T.P.-ing the house. His favorite place to sleep was snuggled up to Lily or on Nancy’s lap and the three became inseparable, especially for the four months he lived in the house.  Jacob had a family made up of humans a dog and a cat. His identify was confused but he was content with his place in life. 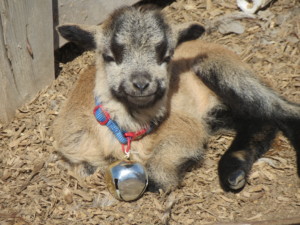 Jacob and his first bell

A Bellwether Lamb – a lesson of leadership

During that time a friend of ours, Mark Walker came to the ranch for a short stay. After meeting Jacob and seeing how much we had become endeared to him and how he had become bonded to us he commented that Jacob was destined to be a “Bellwether lamb”.  It was the first time we had heard the term and asked him to explain…

A Bellwether is a neutered male lamb raised from birth in the household of his master.  We had known a wether was a castrated ram, but had never heard the term “Bellwether”. Mark went on to explained how in biblical times a shepherd would purposely take a new born male lamb away from his mother and raise it in his own household. In this way, the lamb would bond with the master and loose his fear of human contact.  As the lamb matured the shepherd would place a bell around his neck and turn him back into the flock. Because of his special life experience the 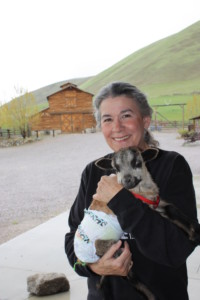 Mark explained that in biblical times the concept of a Bellwether was an analogy of true leadership.  It was an allegorical picture of God’s heart and intent for his people; a people who would intimately experience His favor and lead others to him. Ultimately, Jesus was the fulfillment of a true Bellwether. He was the lamb without sin and the go between from God the Father to all mankind.   In Jacob’s case, it is a powerful picture of what God desires to do even with a life that had been naturally rejected and abandoned. It was a picture of true destiny.  After hearing the story Nancy hung a bell around Jacob’s neck. At first the bell looked out of proportion for his immature small body, but destiny would cause him to grow into it over the course of time. 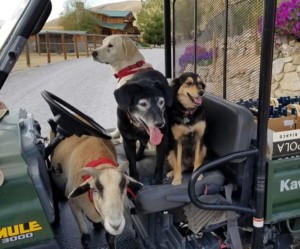 Jacob and the dogs going for a drive

For the past four years Jacob continues to make us laugh. Each morning as I go out to feed the animals Jacob greets me at the sheep-shed door.  As I open the door he leaps out knowing he is free to join the dogs and cat for the remainder of the day.  Jacob has the run of the homestead often keeping me company as I work in my shop or follows me when I mend fences in the open pastures. Jacob never strays out of sight but always remains nearby.  Acting more like a dog than a lamb he jumps in the ranch vehicle and rides with me around the ranch as I do chores or go for the mail on the county road. His favorite thing to do however happens when he spots Nancy with a walking stick for an afternoon stroll.  Jacob loves more than anything to go for walks always remaining by her side except when she comes to large outcroppings of rocks which are characteristic of Timber Butte country.   Being a Barbados sheep (distant relative to the big horn sheep) Jacob is driven to climb. His climbing episodes scare Nancy as he scales to some precariously high ledge and teeters above her. This is another issue of DNA 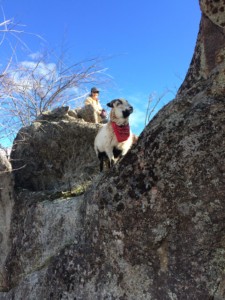 and destiny. Jacob never appears as happy as he is when he climbs.

All sin and fall short of righteousness –Especially Jacob

Getting to know Jacob has reminded us that even those destined to be Bellwether leaders can be sinners. Jacob was never an unblemished lamb without sin like Jesus. In fact he has always been kind of naughty.  We have observed more than once Jacob deliberately strategizing devious behavior. He knows the difference between right and wrong and willfully does things he knows he’ll get in trouble for.  The word “sheepish” perfectly describes Jacob’s body language during those times when he knows he’s in serious trouble. A great example is when eats things made of cardboard.  Jacob’s on a first name basis with Dusty our UPS driver. When the truck arrives Jacob joins the dogs in the chase up the drive and when Dusty parks and turns his back, even for a minute, Jacob leaps in the door and scrambles into the back and frantically eats tasty labels off of packages. We always know when Jacob’s in trouble because we can hear Dusty screaming “JACOB” with a tone of extreme panic in his voice.

Lesson from the barnyard

Jacob is fulfilling his purpose – the destiny to become a true Bellwether. He is a friend to the sheep and a friend of the master. He is an ambassador; a “go-between”, and connecter.  He is a peace-maker and a unifier.  Jacob’s life is another lesson to be learned from the barnyard. His life is a barnyard metaphor of what God desires to do with us all. It is a picture of how God takes a life of seeming rejection and ruin and restores it for His divine purposes.  It is a picture of adoption from a natural family into the master’s household.  [Romans 8:15] It’s a lesson relevant for all people for all times.