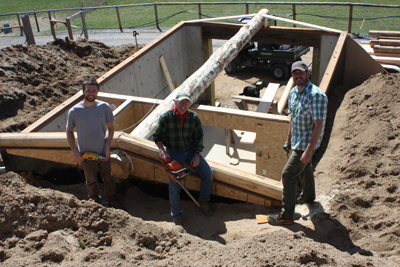 After the hole had been dug for the new cellar the next challenge would be to pour a concrete floor and the eight foot exterior walls. When I had originally dreamed of this project I had envisioned building the walls out of concrete block with my son Brook , but as I contemplated how long that might take I started to consider the possibility of having them professionally poured.   Not only would it be far quicker, but I also realized there might be two other good reasons to hire it out. The first reason was because I knew how strong the walls would have to be to hold back so much earth, especially after heavy rains, and how reinforced solid concrete would be far superior to hand stacked block. The second reason was, after penciling the project out, I concluded the cost in the end wouldn’t be too much greater. For these reasons I contacted a really nice lady I had known from our church, Lee Axelsen who owned Axelsen Concrete Construction and asked her to give us a bid. It was the right choice. 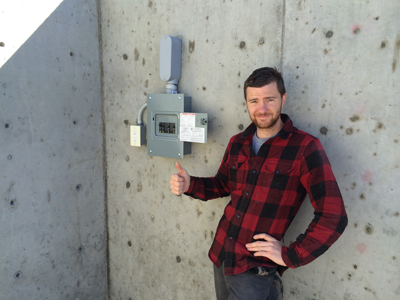 Daniel hooked up the electrical panel

Next was the task of plumbing in water and electricity. This would be necessary for the cellar to have hot and cold running water as well as good lighting, a freezer, electrical outlets to both 110v and 220v. As fate would have it, Nancy and I were hosting a young couple from Australia at the time, Daniel and Kara Dean. They had been traveling around the world examining and participating with various Christian Compassion organizations and had decided to stop off in Boise to experience the work Nancy and I had developed called i-61. (www.i-61.org ). Daniel was a licensed plumber by trade but had electrical experience as well and was happy to lend a helping hand at exactly the right time. Together we wired the new cellar and also laid a gravel covered French drain around the foundation. 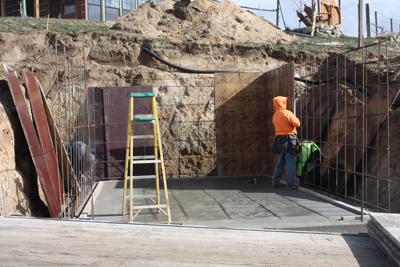 Pouring the concrete floor and forming up the exterior walls

After the floor and walls had been poured I rolled several coats of heavy tar on the outside of the exterior walls in order to waterproof them. I also installed two treated 2X6 double plates around the top which would later serve to attach the roofs truss system. Then I framed the interior walls which would give the cellar two additional smaller rooms and would also provide extra support. Strength was of the essence as the walls would soon be supporting a truss system that would be holding up a tremendous amount of weight.

When designing the truss system I could only think of two viable options. One was to have the concrete guys pour a thick cement lid, reinforced with a net of heavy rebar. This plan would cost at least an additional $2000. Not only would it mean more concrete and rebar, but it would require a temporary timber frame to hold up the wet concrete while it was setting much like building a bridge. I decided to choose a second option; to construct my own truss system using logs. I have a friend named Frank Barns 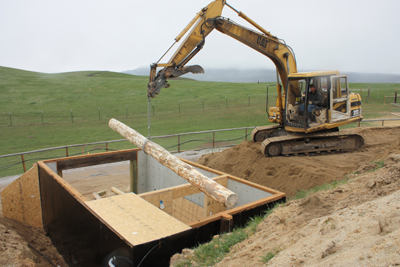 who had earlier provided us with the precut logs for our guest cabin. (See earlier blog from December 11th, 2011 under building projects) Frank and his daughter Jennifer hadn’t been building log cabins for several years, but still had a lot of inventory. Frank agreed to sell me what I needed and even offered to transport the heavy material to the ranch site.

When the walls had dried and everything was ready Jeff Biggers lifted the heavy 20 inch diameter by 24 foot long main-beam into place with his excavator. I had lost sleep imagining how I was going to do that particular job when Jeff came to my rescue again.

Brook and Daniel joined me the following Saturday lifting log rafters into place on three foot centers and then sheeting over them with 2 X 12 planking in preparation for the many different layers of materials that would be necessary to seal the roof. Brook also plumbed in a ¾” underground waterline before the exterior walls were completely backfilled. 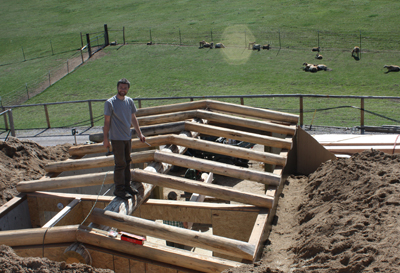 On the root-cellars I had previously built I had used various things to cover and seal the roofs from leakage but on this one I wanted to do things in a more professional and permanent way. Considering all the work and expense this cellar required I didn’t want to ever need to unearth it to fix a problem of any kind. For this reason I did some research and got some council. Here’s what we did.

To start with we covered the 2 X 12’s with two coats of heavy roofing paper. We then laid down a large solid rubber sheet of very heavy pond liner. The pond liner covered over the entire roof and draped down the exterior walls about four feet. We covered the pond liner with 4’ X 8’ one inch panels of foam-board insulation and overlaid it with two additional layers of heavy mill plastic sheeting. The one inch panels of foam-board insulation and plastic would protect the pond liner from being damaged from rocks or other hard objects when the cellar was buried. Now the cellar was ready to be covered over; another job for Jeff

Jeff backfilled the entire structure and the first phase of construction was complete.

Biggers and his track-hoe. When Jeff had finished his work the main structure had been completed and the final phase of finish work would begin. This phase would give the new cellar both character and functionality.

Looking back I am amazed at how many people brought their skills, knowledge and willingness to make this cellar happen. People like Jeff Biggers and his brother, Lee Axelsen the concrete lady, Daniel Dean from Australia, Frank Barnes the log guy and my son Brook who like Daniel is a professional plumber. The Amish have a saying, “Many hands make for light work”, and here on Timber Butte that has always been the case. I guess this goes to prove there is great power in family, friendship and community.