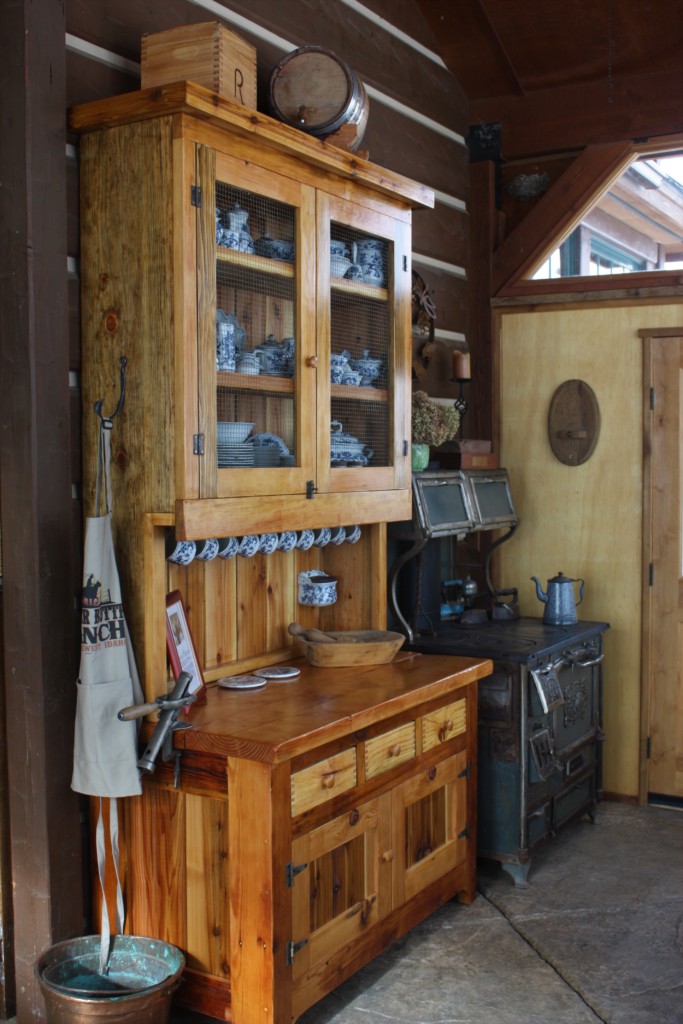 It wasn’t too long ago that our good friend and neighbor, Jeff Biggers, gave me a call. Jeff has an excavating business as well as being a cattle rancher and hay farmer.  His family was one of the first to establish a homestead in this area. I believe Jeff is something like the fourth or fifth generation of the Biggers family to have lived here.  Jeff called and asked if I was interested in barn wood.  He’d been taking down an old barn with his track-hoe and knew I was a sucker for old junk. I of course jumped at his offer. Later that morning I drove back to the ranch with a heaping pickup load of weather cracked, nail filled, gnarly wood.

I spent the remainder of that afternoon pulling nails and cutting off rotten ends of boards and timbers. I added my new treasure to an already growing pile of reclaimed lumber I’d been collecting over time. Much of it had been given to me by two other good friends, Ray and Mike Robnett who had also been feeding my addiction for several years.  For me, these gifts of rejected materials are a gold mine!

The previous winter I had used much of the Robnett materials to close in our back porch. Mike Robnett is a contractor and like his dad Ray he can’t stand to see waste. Many large contractors, after completing major projects take left over materials to the land fill not wanting to be bothered with scraps of used lumber.  As a result Mike’s pile has had a tendency to grow over time and get in his way. I so appreciate his value to recycle, refurbish, reuse and be generous, rather than be wasteful.  All this to say, I spent the winter months turning our porch into a large family room complete with an open fireplace in one corner. I built it as a screen porch, but with homemade windows which could be opened or removed during the warm summer season. Now it is used as our main gathering place for family and friends. 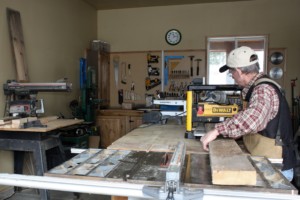 For years Nancy’s china has been stored away in boxes hidden in a closet only to be taken out once a year for Thanksgiving. Between wedding gifts forty-eight years ago and inheriting her mother’s collection there are enough settings to serve nearly twenty people.  It’s no wonder we haven’t had a good place to keep it. Nancy suggested that since the porch had been converted to a family room it would be a nice location for a hutch to display the china. I agreed, but knowing how much it would cost to buy or even construct such a substantial piece of furniture made me hesitant. That’s when I decided to visit the reclaimed lumber pile down in the storage shed.

I fished through the piles of stacked lumber digging out planks with dimensions right for the sketch I had drawn.  Taking them to the wood shop I cut them into the lengths I needed and ran them through a DeWalt thickness planer.  I didn’t want to plane too much of the old weathered surface off, but enough to straighten out bows and bring them to a consistent thickness. Because the wood had been sun dried for so many years it absorbed stain in a way that gave the old grain an amazing rich look. Light cedar stain accentuated knots and nail scars. Over the course of a couple of weeks I fitted the prepared pieces so the finished cabinet would appear to have come out of a hundred year old farm house. I used leaf hinges and traditional latches which I purchased new, but heated them to glowing red in our wood stove. This burned off the shiny galvanized finish and prepared the metal to receive brown stain which gave them an aged look. 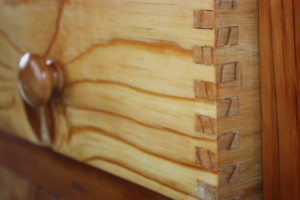 I left the finger joints exposed…

Nancy suggested that instead of putting glass in the upper cabinet doors it might be better to use small mesh wire which I would also burn the galvanized finish off of. This would give it a look much like a vintage pie safe cupboard. For the drawers, I used a homemade finger joint jig my old friend Rand Thompson had taught to make several years before. I purposely left the joints exposed to give the cabinet an additional rugged unfinished appearance. When the new cabinet was complete I think it must have weighed five hundred pounds. Possibly, a little over built because of its hundred year old true dimensioned 2 X 12 timbers. Luckily I built it in two pieces, but even then it took the whole family to move it from the wood shop to the new room. Now, after so many years of moving from place to place Nancy’s china has a permanent home where it can serve the family for many generations to come.