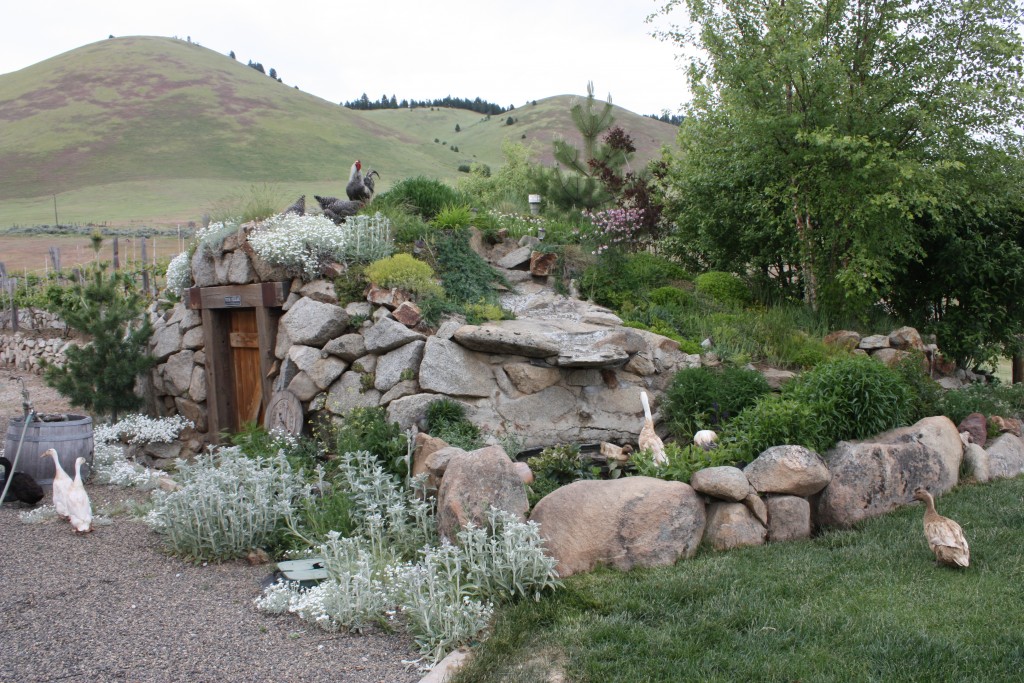 I’ve built three root-cellars over the past forty-five years. The first one I hand dug when I was in my 20’s on the old original Robinson Ranch. The second, I built here at Timber Butte nearly ten years ago. These first two I would call “kitchen storage cellars” while the last one (the one we recently built) was a much larger project. It was not only built for storage, but for food and wine processing. The two kitchen cellars were located close to the kitchen so they could be accessed in any weather even though they were not connected to the house. They were smaller cellars with floor dimensions of approx. 8’ X 10’. Both were constructed out of material I had on hand. The first cellar I built with granite rock walls while the second one was built using earth packed tires. (Used tires can be acquired for free at most any tire store.) These cellars were designed primarily for all season storage. They were constructed

underground for the purpose of maintaining a cool temperature and consistent humidity in summer and winter. Neither of these two 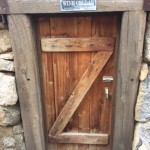 cellars ever had below freezing temperatures in winter months and both stayed pleasantly cool in summer. Nancy and I store root crops (things like potatoes, onions, carrots, etc.) so that they can be eaten all winter. We generally eat the previous summer’s potatoes and onions up until the end of February. In earlier years, before Nancy discovered the effectiveness of drying and freezing fruits and vegetables, she used the cellar to store her canning as well. I also used the cellars to hang and age meat before cutting and wrapping it. Cellars like these 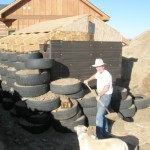 I used earth filled discarded tires on the second cellar

have been successfully used for generations as substitutes to modern day walk-in refrigeration systems. Exploring nearly any old homestead you will most likely discover the caved in remains of these types of cellars.

As I mentioned in my previous blog our wine and meat production began to grow. Not only did we need a cellar for storage, but now for the processing of both meat and wine. That’s when we went back to the drawing board and began to plan the construction for something much more conducive to our new needs. 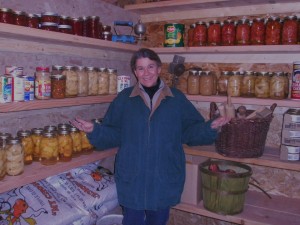 Nancy stored her canning along with root crops

The first task was not only digging a large hole, but to find a hillside location suited for it. We chose to dig directly into the hill the house was built on. The door of the new cellar would open onto the drive that led up into the yard of the farmstead. We wanted a location that would be accessible to our small utility vehicle. For many years we have used a Kawasaki Mule as our main ranch work vehicle. It is much better suited for almost any task than the ranch truck because it is much more efficient and small enough to drive in places like the vineyard, barn and corrals.

In the planning phases of the project I thought I would rent a backhoe and dig the needed hole myself, but soon realized this hole would be way out of my league for two reasons. One, because of the sheer size of the hole and second because the hill was made of hard 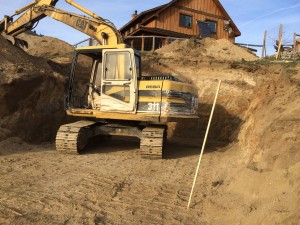 Jeff Biggers came to my rescue and dug the hole

decomposing granite. For these reasons I contacted my neighbor, Jeff Biggers who owned and operated a track-hoe excavator. It was the right choice because the hole turned out to be much greater than I had envisioned. It not only had to contain a fourteen by twenty-four foot structure, but it also would require a two foot access space around it to allow for room for the workers to build forms for the 8’ exterior concrete walls and provide space for a gravel filled “French drain” to keep moisture from entering the cellar. It turned out to be a big job, not only because the ground was so hard but Jeff had to get his brother Tim to bring in a dump truck in order to relocate the dirt from the area until the structure was ready for backfilling.

When the hole was dug I started to wonder if we had bitten off more than we could chew. Now it was time to figure out how to construct the floor, walls and a roof capable of holding up four feet of soil. (To be continued)