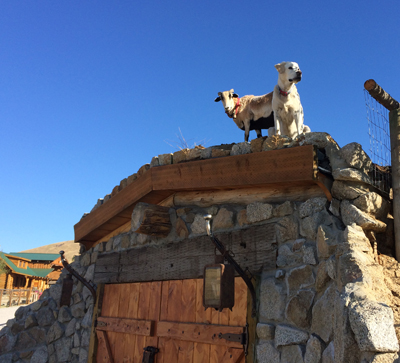 From the beginning it had been our goal to have the new cellar finished in time to be used for the next grape harvest in October of 2015. Amazingly, we made it even earlier than expected. In September of that year we used it to bottle wine that had been aging from the previous year and butchered several lambs. What a blessing it was to finally have a facility that was not only spacious and sanitary, but specifically designed for both of those jobs.

As soon as Jeff had finished burying the concrete structure I began the finish work. The first thing was to face the cellar with granite rock. This was not only to give it an old world look, but to reinforce the backfilled dirt keeping it from washing out around the sides. When the face was completed I hung two large insulated doors on the front. I constructed the doors by building two 2X4 frames sandwiched between ½“plywood filled with 1½” foam-board insulation. When the doors were hung I began the final work inside. 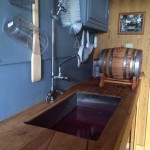 Brook’s wine making side was on the left.

With the help of my brother in law Stephen Jaqua, I hung the two solid core doors that separated the main room from two interior rooms. One room was to house the fifty gallon hot water heater and electrical service while the other was the temperature controlled room. It was the larger of the two and would be used to process and age wine.

Bottling the previous years wine before the new harvest.

The main room was designed for two purposes, one was for my butchering and meat processing and the other was for Brook’s wine making operation. For this reason we said the left side of the cellar was Brook’s side and the right side was mine. On the right side I hung all my knives and butcher tools, a chest freezer, and installed a 220v outlet for my Hobart meat saw. On the right would be a long stainless-steel counter, a commercial sink and a cabinet for all of Brook’s specialized wine making stuff. 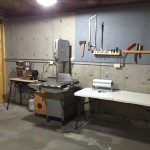 On the right was my meat cutting tools.

Brook had amazingly found a 12 foot stainless-steel sink at a recycling center in Boise and managed to purchase it for something like twenty dollars. It fit perfectly. I built him a cabinet especially for his tools, and he plumbed in hot and cold water. I attached a heavy duty barn door rail along the main beam so we could slide hanging animal carcasses from the front doors to the back of the cellar and Brook purchased a 100 gallon fermenting tank and installed it in the back room. We also hooked up a hot water outlet with a hose bib to service a power-washer to wash out the entire cellar after the messy jobs of both wine making and butchering. When it was all done, we were ready to put the new cellar to use. 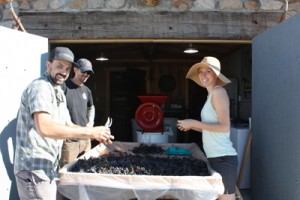 The granite rock face gave the cellar an old world look and served as a retaining wall.

One of the first jobs we did was to butcher a lamb in preparation for the upcoming harvest party. Brook and Andrea invite friends to come and help pick and crush grapes as soon as the grapes sugar content is ready; usually sometime in early October. After all the work is done, Nancy and I like to host a BBQ as a thank you to all who participated. This year I dug a permanent deep pit to roast a whole lamb in. The second job was to bottle all of the previous year’s aging wine and the third was to process the new grapes in preparation for fermenting.

When all was said and done, the cellar worked wonderfully. We all said over and over again, “How did we ever get along without it”. All the work had been worth the effort.