Chapel at Timber Butte – Part 2 – A labor of love

A labor of love…

Building a foundation on the Chief Cornerstone

The day Nancy and I went up the hill to stake out the location of the chapels future foundation we came upon the first of many challenges.  In the very place we desired to locate the chapel there stood a huge unmovable granite rock protruding from the ground.  At first we tried to avoid the obstacle by marking out the plot in nearby places. Nothing seemed right to us and after about a third attempt we finally resorted to what we should have done in the first place; we decided to pray. It was during that time of prayer we were reminded of the words of the Apostle Paul in the book of Ephesians where he had said the church was “…built on the foundation of the apostles and prophets, with Christ Jesus himself as the chief cornerstone. In him the whole building is joined together and rises to become a holy temple in the Lord”. (Eph. 2:20) I turned to Nancy and said that it had been no accident the rock was right where it was. In fact it had been put there from the foundations of the earth for this very purpose. That very rock (which had actually irritated us at first) became the first stone of the new foundation and a great blessing. The 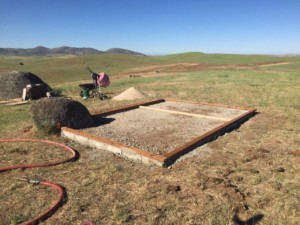 rock was so large that after the chapel had been completed it was exposed both on the inside and outside of the corner wall. On the inside it now serves as the perfect place for someone to sit while observing the sun setting over the distant western hills.

Rocks, rocks, more rocks and a labor of love

Good building rocks are not always easy to find. Having been taught to work with granite rocks years before by my father I knew I needed to find rocks with squared off surfaces. Round rocks are like trying to stack marbles. Building rock walls here on the homestead is not a new thing. We have built literally hundreds and hundreds of feet of rock walls here and Nancy and I have had to transport 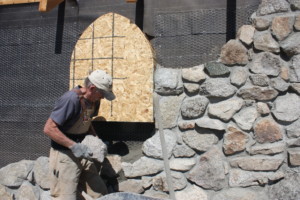 Fitting stones in places they belong

rocks from quarry’s that were sometimes hours away.  Building the chapel like the one we had envisioned would take many, many pickup loads over the course of the next four months of wall building not to mention the loads of sand, gravel and cement which would then be hand mixed in a small electric mixer. It would be a marathon of hard physical work; much of which would be done straining up ladders with buckets of wet cement and heavy stones. It would be a labor of love. 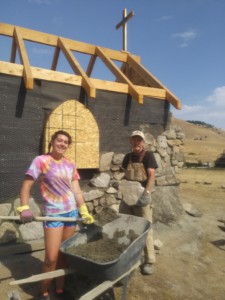 Hope volunteered to lend a hand

One day our granddaughter, Hope Colleen came to the ranch and volunteered to lend a hand for a couple of days. Rock work was new to her but she worked hard all day with me in the sun and quickly captured the skill. She learned not only to mix mortar to a perfect consistency, but also captured the art of recognizing the shape of rocks to fit various places on the wall. She learned how to backfill rocks with concrete so that their flat surfaces became flush with the wall around them. It was a joy not only to watch her capture and appreciate a new art form, but more than that to have the opportunity to hang out with her and experience an accomplishment of meaning.  Hope was with me the day we set the final stone on the last high wall. It was a rich moment of victory and we celebrated it together. When we had finished I remember Hope becoming really serious. She turned to me then and told me something I’ll never forget. She reminded me that she was the oldest grandchild and said that she felt it would be her responsibility to hand down the family tradition, love and skills of building with granite rock to the next generation. Both of her cousins, Ella and Olivia were in early childhood. Actually Olivia, the youngest was yet to be born. It made me think; not only did I deeply value what Hope was saying, but I thought that somehow this particular chapel construction project was in a way a hope in itself for what was to come for all of us as a family.