A Cellar for Meat and Wine – Part 1 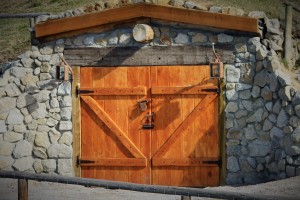 A New cellar for Timber Butte

Our farmstead here on Timber Butte has continued to mature since its conception ten years ago. As a result our agricultural production has increased year by year as well. Fruit trees have grown, the vineyard is now producing nearly fifty gallons of organic Cabernet Franc and the sheep are providing over fourteen butcher-able lambs. There has been an increase in vegetable production, poultry, egg production and “Ida” the cow gave birth to her first heifer calf that we named “Ho”. (Now we have “Ida’s – Ho”). All to say: as our food production has increased, so has our needs for adequate food processing spaces especially for the tasks of winemaking and butchering.

When it comes to the grapes, I have served from the beginning as the vintner (the tender of the vines), while Brook 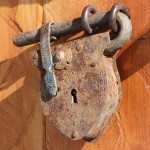 (our son) has developed his skills and expertise as a quality winemaker. Winemaking requires not only a lot of larger type equipment (such things as a destemming machine, a fruit press, a bottle corker, large fermenting and storage containers, etc.) but the space to use and store them. I on the other hand, being the head butcherer, had been realizing how we had long ago outgrown the small backroom of the barn which had served as the farms butcher shop. The time had come when we realized how much we needed a space for both of these tasks. We needed a facility where we could control temperature and humidity while being both spacious and sanitary. 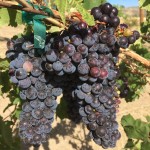 After the grape harvest of 2014 Brook realized his winemaking capacity had outgrown Nancy’s laundry / utility-room. Nancy enthusiastically seconded his motion to build a new underground facility that would meet the need. Nancy had grown weary of having to work around two large barrels of fermenting wine in the middle of her utility-room for the better part of the previous fall. I too knew I needed a larger space to meet the families butchering demands. Everyone had become frustrated with the way we had been forced to do these necessary tasks and knew if we hoped to fulfill our dream of developing Timber Butte into a sustainable farmstead, things had to change.

For a long time we had dreamed of a large underground cellar that could serve both of our winemaking and butchering needs. We also knew the work and expense to build such a structure would require a huge commitment and the thought of it seriously quenched our motivation to even begin such an undertaking. In the winter of 2015 the handwriting on the wall became clear. It was time to take a step of faith and break ground for this new project. If the goal was to have a functional cellar in time for the next falls grape harvest and the next winters butchering then we had to get started. I’ve found that getting started is always the hardest part of any major undertaking and I’ll admit it, this project totally overwhelmed me.

I think one of the greatest and maybe the most difficult challenges are those that push on the human buttons of personal inadequacy. The greatest fears in life are the fears of the unknown and from my experience they have the devastating ability to paralyze people, keeping them from doing anything of great value. There is an enemy that will always attack the human mind convincing us that we are incapable of doing 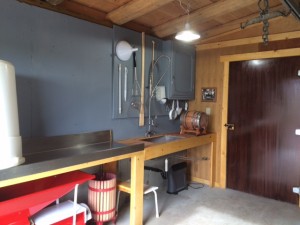 the impossible or breaking the status quo of our lives. They say we don’t have the goods, the strength, knowledge or experience to do anything out of the norm. For that reason, that first step is always the hardest. My council on the matter, to myself as well as others, is to take a first step and figure out where to go from there. You’ll learn what you’re doing along the way. My first step was to simply take a ball of string and a few stakes and lay out on the side of the hill below our house where the cellar would be located.

I’ve dug lots of holes in my life and I knew this one would be more than I could do with a pick and shovel in a year. This hole would require a chasm large enough to contain the construction of a structure with eight foot concreate walls strong enough to support four feet of backfilled earth on its celling. The structure would require hot and cold water which would mean at least 60 amps of electrical service. The dream was to have three rooms: a large fourteen by twenty workroom, a room for temperature control and a utility room. This would be a huge project and from a lot of past experience I knew I had 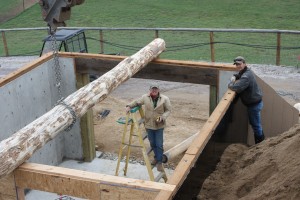 Setting the main beam during construction

only one of two options; procrastinate and live with the frustration we were all experiencing, or pursue the dream and start digging. We started to dig.

In the next few blogs I’ll be sharing with those who might be interested in the process that finally ended in a wonderful underground workspace. A large cellar that became both attractive and functional. I’ll walk you through the project step by step sharing the ups and downs of yet another “build as you go” Timber Butte do it yourself project.