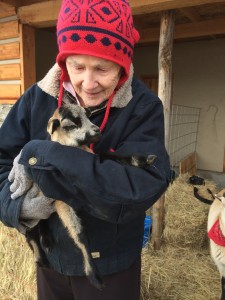 Mom’s last year on the ranch

Before I tell our story of bringing my 92 year old mother who had advanced dementia home to live with us, I’d like to make a comment concerning the sustainability of families who are facing this dilemma as to how best to care for aging parents. More and more it is becoming the norm in today’s world of farming out parents to literally thousands of assisted living and memory-care units across our nation. These facilities are rapidly multiplying and are huge money makers. Before we brought my mom home we had moved my parents through four different facilities at great expense to them and ultimately to the whole family. My father more than my mother rapidly advanced with Alzheimer’s and outgrew the capabilities of one facility after another moving from retirement home to assisted living to two different lockdown memory-care units. They paid between $6000 and $9000 dollars a month for the two of them and frankly we were always disappointed in the quality of care they received. Not that the caregivers we encountered didn’t put their best foot forward, but in most cases they were understaffed and underpaid. As hard as they tried they could never take the place of family. Visiting my parents in these facilities many times a week for several years made me acutely aware of how lonesome most of the residents were and how hungry they were for family relationships. My point being, this is not only an unsustainable system of care for the elderly but, in my mind, not God’s best for them or their families. Here’s our story:

In the fall of 2014 I was hunting elk with my old friend Pat Armstrong in the back country of Idaho. We had amazingly both shot young bulls and were being faced with the daunting task of packing several hundred pounds of meat through some five miles of rugged country when my cell phone vibrated in my pocket. Reception was spotty at best and the likelihood of getting enough reception to receive a call was unlikely, but the fact remained, the connection was made and a call from my elderly mother broke through the solitude of the moment. There was stress and urgency in her voice as she exhorted me to come right away because my 97 year old dad was dying. My mom was 92 at the time and had advanced dementia. I had received this kind of call many times in the past and wasn’t sure what to think until I received a second call from Nancy confirming that it was true, my dad was failing and had only a few days left to live.

Forty-eight hours later Nancy and I were sitting with my mom as Dad peacefully passed on. My dad had been an amazing man in life and he had fought a good fight all the way to the end, but the last several years had been a great struggle not only for him, but for us all. My mom was lost without him and we knew we couldn’t abandon her in a lock-down memory care unit away from family now that she would be all alone. For years we had anticipated this moment wondering what we should do.

Several months before Nancy had been in a time of solitude and prayer earnestly seeking God as to what we should do when that time would inevitably come. The word she received was clear to her and she related it to me with conviction and certainty. We were to bring my mom home and be her caregivers. She told me she had felt the Lord say mom would experience four seasons with us. 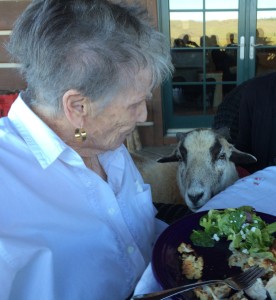 Mom and Jacob had a love / hate relationship

We moved her home the last week of October 2014 just as winter was preparing to set in. Nancy and I moved out of our master bedroom on the first floor and relocated upstairs in the guest quarters giving her easy access to our larger bathroom and the main floor of the ranch house. What happened over the course of the next four seasons was a story worth writing a book, but what was most amazing about the story was that mom did in fact, almost to the day, live with us for four wonderful and hard seasons. During that time her dementia advanced into the disabling craziness of Alzheimer’s. There were times when she didn’t fully know who we were, times when she thought she lived on the old original family ranch in California, and times when, in her frustration, became volatile, angry and verbally abusive. Mostly however, there had been rich moments as her children, grandchildren, great-grandchildren and many close friends faithfully traveled to the ranch sharing all four seasons with her.

The ranch provided her with the richness of life. Not only her human family, but the animals stimulated her to times of laughter and real joy. She experienced the birthing of the lambs, held baby chicks close to her chest and had an ongoing love / hate relationship with Jacob, the bummer lamb who had become a family pet and mascot here on the farmstead. Jacob loved mom and more than once showed his affection by peeing on her feet.

Mom’s last word was the name of “Ella”, one of her great-grand daughters

There were times when mom could participate and even be helpful in the kitchen. She felt valued and needed when Nancy gave her a bowl of peas to be shelled for the family dinner. These were things she couldn’t do while living with dad in their old memory-care facility.

Mom died the first week of November 2015 almost exactly a year after bringing her home. The Lords word to Nancy proved to be true; she was with us for four full seasons. She died in her bed with her family around her. Her last intelligible word was “Ella”, the name of her new great granddaughter whom she had been able to hold and adore right to the end.   The experience of having Mom with us the last year of her life was not only a blessing to her but richly drew the entire family together. It was the right thing to do and looking back we realize what a huge blessing we would have missed.