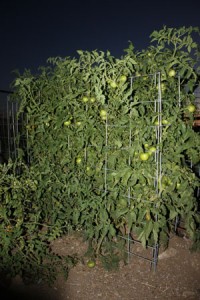 Tomato vines the evening before the first freeze 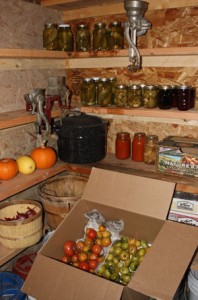 Ripening in the root cellar

The first days of consistent freezing temperatures here at Timber Butte Homestead generally begin just about the time our tomato plants have finally matured and are in their best production.  No matter how we try to save them, the solutions are generally unsatisfactory extending their growing season for only a few days or maybe a week at best.  In years past Nancy generally salvaged the best of the remaining un-ripened ones by cooking a batch of fried green tomatoes or putting some in the windowsill giving us fresh tomatoes for a few more weeks. This year we tried something different with success.

A few days before an anticipated frost this past fall I happened to be talking to a pastor friend of mine from   Montana and the subject of tomatoes somehow came up. He shared a solution to the familiar dilemma that he and his wife had successfully been practicing for years.  He told me to pick every leftover green tomato before the frost and set a single layer of them on the bottom of a cardboard box placing several layers of newspaper over them and repeating the process until the box was full.  He then instructed me to put the box in a cool dark place such as a root cellar and remove tomatoes as needed throughout the winter months allowing them to finish ripening on a windowsill.

It is now in the dead of winter and we are still eating summer tomatoes that would have otherwise been added to the compost pile. Our thanks go out to Terry & Carol Helseth from Great Falls, Montana as we have been enjoying watching our tomatoes ripen on a sunny windowsill with 2 feet of snow outside.