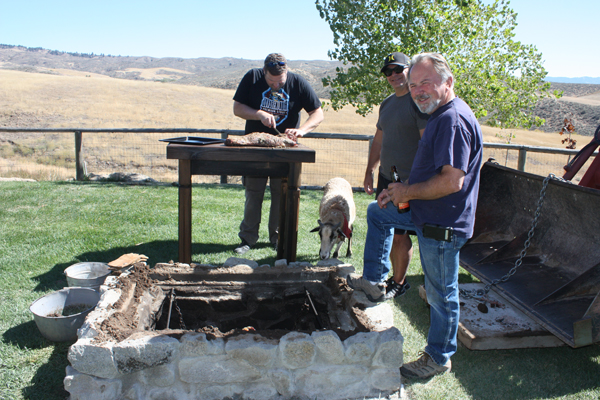 There’s nothing like a deep-pit BBQ when you’re cooking for a bunch of special friends. It’s a lot of work, no question, but when the pit is uncovered and the aroma of a huge chunk of roasted meat hits your quests nostrils, there’s nothing like it for cooking drama. Years ago, on the old ranch, Nancy and I often hosted BBQ’s for large groups of people. In those days we had no way of knowing absolutely for sure how the meat which was being cooked in a deep closed pit would come out. Everything was done by guess and by golly and the variables always changed. By God’s grace it always came out O.K, but to this day I remember the apprehension we both experienced every time we did it. It was always a bit scary digging up dinner and unwrapping it before so many hungry guests. 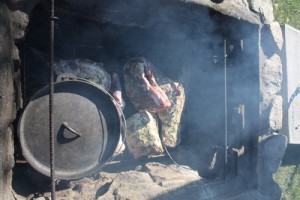 A whole young lamb and a Dutchoven full of baked potatoes

In those days things were pretty basic. There were many steps in the pit cooking process, and to do it right required two days of preparation. Because of the work it took, we rarely used pit style cooking even though it was such a great way to prepare food.

This was the process: The first day I would hand dig a fresh hole in a location away from anything flammable due to the size of fire needed to preheat the pit. Second, I’d line the hole with stacked granite rocks, gather a large pile of hard Oak for fuel, a large container of water and the materials needed to later cover over the hole with dirt. When all was prepared I would build a roaring fire in the bottom of the pit and keep it burning until I went to bed that evening. I set my alarm for two A.M., climb out of bed in the dark hours of morning and hauled the prepared sides of beef to the pit. 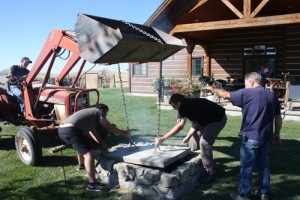 Most often we used large whole shoulders of beef which Nancy would prep with spices and rubs. The meat would be wrapped first in a clean white sheet and then with several layers of burlap. I bound the whole package with bailing wire to hold it together and to form a wire loop on the top of each bundle. The loop was used as a place to hook the meat with a long rod in order to lower and raise it in and out of the hot pit.

When I arrived at the hole in the early morning, I knocked down the blazing coals and placed flat rocks upon them so the meat would not directly touch the coals. Just before lowering the meat package into the hole I submerged it in the water barrel I had prepared in advance until the sheet layers and burlap were soaking wet. Then I carefully lowered it onto the rocks below. I laid several long steel pipes across the open pit and on top of them placed corrugated roofing steel so that the hole was covered and ready to support about a foot of moist dirt. Over the course of the next ten or twelve hours I would periodically examine the hole continuing to shovel more dirt on spots where steam created new venting holes. This was necessary to keep moisture in the pit and from allowing heat to escape. The meat always came out wonderfully, but it was a huge undertaking and a temporary one which required a complete rebuilding of the pit every time we decided to entertain guests in such a way. 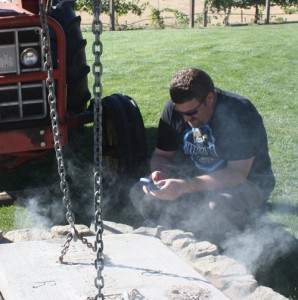 Now that we have established Timber Butte Homestead we are attempting to build with greater permanents. We love the idea of pit BBQing for larger groups of friends, but because age does sometimes develop wisdom, last year I had a new idea. In preparation for last fall’s grape harvest party, (a dinner we always prepare for everyone who helps pick grapes) I decided to build a permanent pit in the middle of the backyard lawn. Because the house is built on a solid granite knob, it took me nearly two days using a heavy steal bar to dig a hole five feet deep, six feet long and four feet wide. When the hole was finished I lined its walls with flat mortared granite rocks from the bottom of the pit to about a foot above ground level. When the rock and mortar had set up I poured a concrete lip on the top so that a rectangular reinforced cement lid would perfectly fit inside it. Using a 2X4 frame I separately poured a lid four inches thick. I also set two chain handles, three feet apart, into the wet cement which would then be used to lift the heavy lid into place with the help of my tractors bucket. 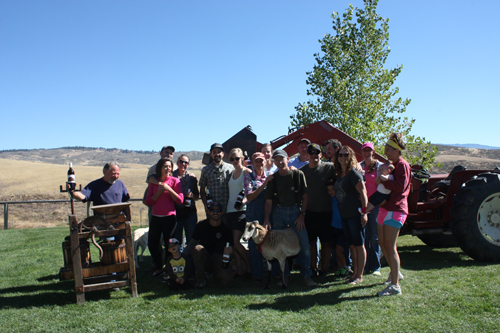 The dinner bell was rung and all were present when the pit was opened.

For the harvest party we decided to cook a whole young lamb. (Aprox. 25 lbs.) A friend of Brook’s named Aaron had the reputation among his peers as being an accomplished gourmet BBQ chef. Aaron volunteered to jump in and help butcher and prepare the lamb the day before the event. Early in the morning of the party we built a roaring fire in the pit using a large bag of real charcoal and some logs of dried Apple wood. Several hours before dinner had been anticipated we lowered the lamb and a large Dutch oven full of potatoes into the pit onto a steel grate. Aaron stuck the probe of a digital meat thermometer into the lamb and ran its small two foot cable outside the pit through a channeled hole so that the meats temperature could be continually monitored from the outside. In this way he knew when the lamb was perfectly cooked without us having to open the heavy lid, breaking the chambers seal.

With the help of two friends to guide it, we lowered the lid into place and chinked the crack around it with wet mud. When the chamber had been perfectly sealed we left it until the thermometer told us the meat was done and the pit was ready to be opened. The dinner bell was rung and all were present when the pit was opened. The aroma of roasted lamb stirred the appetites of about 20 hungry workers. It was a perfect success.

The new BBQ pit had not only worked out wonderfully and the meat not only turned out exactly the way we anticipated, but to my greater delight, the pit was ready for the next big event without having to re-prepare another hole.