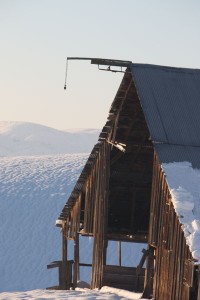 Our neighbors old barn still has a Jackson fork rail

Several years ago Tim McFarlane, an old friend of mine gave me half a dozen long handforged steel tines. He didn’t know what they had been used for or where he had acquired them but thought they looked like something I might like.  I recognized them at once as being teeth from an original Jackson Hay Fork; a primitive mechanical contraption commonly used in the 1800’s to fill hay barns with loose cut hay.

In those earlier days before bailers had been invented, it was common for a rancher to drive a header-bed wagon loaded with hay from the field under the front overhang of a gabled barn roof. There a Jackson fork attached to a rope was lowered and shoved into the wagons loose hay stack. The rope ran through a pulley attached to a metal track which was anchored to the ceiling of the barns truss system and was pulled by a horse from the opposite side of the barn. As the horse pulled, the hay lifted off the wagon in the long teeth of the Jackson fork.  It rose to the top of the barn where it slid through the upper door into the loft where it was released and dropped.  This process was repeated over and over until the field was clean and the barn was full of fresh new hay.  [For a clear illustration see  http://syrpa.lindberglce.com/barn/hayfork.htm ]

The winter cold has a way of taking the fun out of doing outside projects and it’s easy for boredom to set in.  That happened to me a few days ago and after reading an article on the use of Jackson forks I remembered the steel teeth I had been storing so long in the shed.  Digging through many other discarded treasures I found the old teeth and packed them up to the shop along with scraps of hard wood and other odds and ends.  By the end of that afternoon I had assembled a close reproduction of the fork I had read about earlier in the day with plans to hang a track and pulley system across the ceiling of the barn.