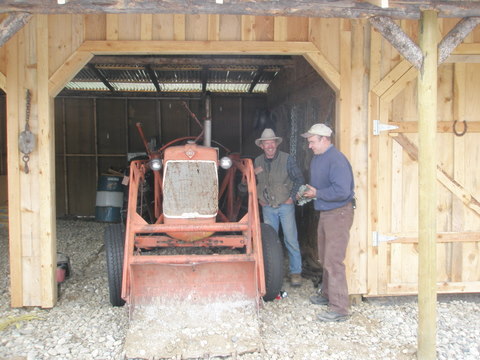 It can be overwhelming and sometimes paralyzing when a person is challenged with a new task not knowing how or where to even get started.  At first the thought of putting up our own hay was like that for me.  For years we had bought hay from farmers and dealers, but had never attempted to bale our own.  Frankly, I was overwhelmed and even fearful knowing that we were about to make some major investments in expensive farm implements that I had very little knowledge about.  My old Allis Chalmers tractor was having a lot of mechanical problems that I had thought were serious so we made the decision to buy an International diesel tractor from a friend that I had known and trusted for thirty years.  Paul Taylor had taught me to weld and do other important ranch type skills years before while we still lived on the old original ranch in California.  I knew if I bought a tractor from Paul I would also get his mechanical expertise along with it. That’s a valuable resource for someone like me.  After purchasing the International it happened that another mechanical friend of ours, Don Hebbertt, dropped by and after a closer look discovered the old Allis Chalmers simply needed some carburetor work.  (More on Don later.)  Now I had two old functional tractors but as yet no implements to pull behind them.  My goal was to keep things as simple as I possibly could.  I wanted basic tools that were not only dependable, but simple enough that I could fix most breakdowns myself.  Mechanics is not a passion of mine although having lived in rural settings I’ve had to develop some basic working skills.  I had learned that there were two directions I could go; I could get a swather which would both mow and rake the hay into windrows in one fast process, or I could take a step back and get an old conventional sickle mower and a side delivery hay rake.  This would not only double the steps it would take to get the hay into windrows and ready for bailing, but a sickle mower is known to be a slow tedious process; it can only cut about a six or seven foot swath and will only be effective if done at a very slow speed.  The side delivery rack is faster, but adds another step.  Swathers on the other hand are fast but complicated.  A combine can be pulled behind a larger size tractor (more powerful than the one I bought from Paul) or can run under their own power.  The problem for me was that it meant another piece of expensive equipment to maintain.  We were only planning on haying about 60 acres and it just didn’t seem worth the hassle.  We opted for a traditional old sickle mower, a side-delivery hay rake and a pull-behind hay baler.  The question was, where would we find this stuff?  We knew that we couldn’t afford to purchase new equipment but also didn’t want to buy someone else’s problems.  We found an ad in the classifieds that advertised someone who was selling all three implements at the same time about an hour and a half away.  We called immediately and made a deal.  Ray Hawkins was an old cowboy that had grown and baled hay for his own use for most of his life.  He said he was getting too old to keep it up and decided to retire from the ordeal.  He loved his equipment and had maintained it well for the years that it had served him.  After making the drive and meeting Ray face to face we decided to purchase not only his mower, rake and baler, but an old hay elevator and some other miscellaneous horse drawn stuff as well.  The challenge now was to get all these new treasures home.  This is a story in itself worthy of an entry of its own.