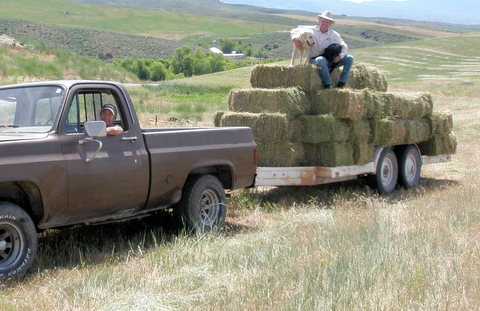 Picking up our first field of hay

I showed up at old Ray Hawkins place with a flatbed trailer behind my pickup only to discover that the hay rake and the baler that I had just purchased from him had too wide of a wheel base to fit on the trailer. Now what? I realized that transporting these implements to our ranch was going to be really difficult. He lived on one side of the greater Boise metropolitan area and we were in the hills on the opposite side. Trying to pull a baler that would take up an entire roadway through city traffic would be a formidable challenge.

I planned a roundabout route and decided to attempt my journey on a Sunday afternoon. I drove out to Ray’s after church all psyched up for the venture only to find one of the dual tires on the baler flat as a board. Because I didn’t have heavy enough tools for the job I called my old friend Paul Taylor, who lived in the area, to come to my rescue. We removed the tire only to discover that the water pump on my pickup had just gone out as well. Being a Sunday afternoon nothing in town was open and so my first attempt was temporarily foiled.

A few days later Paul volunteered to transport my hay rake for me on his larger flatbed.  By then I had managed to get all the other implements home except for the baler which was the greatest challenge. A few days later I mustered up the nerve for a second try. I replaced the tire early one morning and started out on my charted route using outlying country roads as much as possible. The right outrigger tires rolled along the shoulder of the road as my pickup hugged the center yellow line.  It took full concentration and constant awareness not to take out mailboxes and road signs along the narrower stretches of country roads. It was nerve-wracking, especially on the stretches of highway where the normal flow of traffic was 60 to 70 mph and I dared not break 35.

After about two hours I finally arrived at a stretch of washed-boarded un-surfaced road about five miles from home. Trying not to rattle every nut and bolt out of my newly acquired vintage machine, I crept along at a snail’s pace until I neared Timber Butte Road and could see our house on a hill in the distance. Knowing that I had almost made it, I felt a momentary sense of relief and let down my guard only to hear a great crash behind me.  I had forgotten about the outrigger tires sticking out on the right just long enough for them to go off the road and smash into a huge granite boulder. As I looked in my rear view mirror I saw the baler leaping though the air and the tires bouncing independently down the road.

I was devastated and defeated when I pulled into our yard a few minutes later. My dreams of farming hay that year seemed like a complete loss. Nancy came out to meet me and immediately recognized that ministry was in order. She tried to cheer me up but soon realized that short of God’s intervention nothing was going to fix me or the baler right then. She grabbed my hands and asked God for help—comfort for me and healing for the baler.

Within a matter of minutes Don Hubbartt, our friend from church, drove into the yard.  Don had grown up on a farm using the same New Holland baler for much of his life. He was a mechanic by trade and was familiar with every kind of farm equipment. You’ve got to understand I knew Don was handy, but had no idea of the rest. Not only that, but he didn’t even know I was bringing the baler home that day. At that moment he seemed a lot like an angel sent from God. We spent the afternoon going through every part of the machinery cleaning, tightening and lubricating all the moving parts. We repaired the broken wheels, rethreaded the baling twine and hooked her up to the power takeoff on the tractor.

The day before I had mowed and raked one five-acre field with the help of two new neighbors, Lester Davis and Craig Krosh. I guess everyone in the country could see a disaster waiting to happen at the hand of such a total greenhorn. The only thing I had in my favor was zeal and perseverance.

Don walked behind me as I pulled that old baler down the windrows dropping broken bale after broken bale. He continued to adjust the tension and everything else until our first bail finally dropped out and laid perfectly intack in the field. I can’t begin to express how I felt; it was almost like having a baby after months of labor and dreaming. (Well maybe that’s an exaggeration, but it was great.)

This has been a long tale to make one simple point: a sustainable life can’t be done with independence – it requires community and real friendship. It requires people willing to jump in and help one another sharing their knowledge, gifting and special skill sets.  Going through this ordeal of learning to bale hay endeared us to our new neighbors and our faithful old friends.