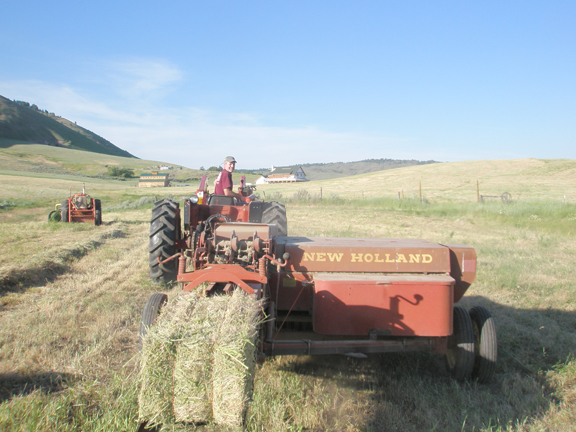 My first morning of baling hay

I had been baling hay for the very first time in my life on a ten acre field at the west end of our new farmstead. It was the last week of June and I had been working since early morning pulling my recently acquired old New Holland baler behind an equally dated International tractor. The sun had just risen and in its first light I looked across the field with great satisfaction seeing perfectly strung bundles of hay randomly but neatly laying in my wake. It was the first fruits of a harvest I had been dreaming about for years. I had never considered myself a farmer. I had never run a baler and to be perfectly honest I had no idea how a machine of its vintage could bundle, compress and tie knots around bunches of loose hay. To me, it was nothing short of a great miracle, and as those first bales dropped I had an overwhelming feeling of satisfaction. Just then I looked up from the wind-row I was following just in time to see our old brown ranch truck and a flatbed trailer ambling towards me across the adjacent field. As it pulled up beside me Nancy jumped out escorted by our two enthusiastic yellow labs, Jenny and Lily. It was more than my heart could bear and without warning emotion caught me by surprise. My heart was so overwhelmed with gratitude and thanksgiving that I spontaneously broke into tears. I wasn’t expecting it and felt a little foolish sitting there on that man-sized diesel tractor. I hoped that Nancy wouldn’t notice but it was to no avail.  Looking back at it now I realize those tears were the manifestation of a realization that God had fulfilled a vision and lifelong desire for Nancy and I after nearly forty years of marriage.  In that moment it hit me head-on how good the Lord is and how faithful he had been to us. The harvest I was physically experiencing in that hayfield illuminated a greater harvest in our personal lives than a mere stack of neatly piled alfalfa and grass. To us, it represented a harvest of years of planning, hard work and the faith to trust God for his miraculous provision.  For years we had dreamed of developing a small farmstead that would be capable of producing enough hay to sustain a few working horses and cows from one haying season to the next.  On a year of normal rainfall and snowpack Timber Butte should produce just enough dry-land hay to service exactly what would be needed with an additional 30 acres of un-farmable range that can be grazed in the late spring.  It has taken some time to get a feel of things and an understanding of exactly how sustainable things are.  If you have too many animals to feed the land will suffer and eventually wear out, but if managed well it should be capable of serving indefinitely.  In my entries over the next few days I will share the learning curve we have been on not only on the art of making hay but how we discovered the livestock potential  of that hay, discovering just what is needed to sustain a small operation like this one.