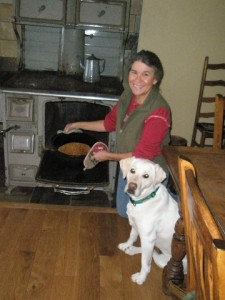 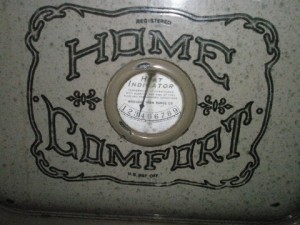 We woke up on New Year’s morning to four inches of fresh wet snow and more coming down.  It seemed like a great day to bake sourdough bread.  Nancy checked a new recipe that she had come across in her Dutch-oven cookbook while I searched the pantry and root cellar for the ingredients called for.  I cut kindling and fired up old Eloise (our Home Comfort wood cook stove) preheating her oven to a steady 350 degrees.   Eloise is our second Home Comfort cook stove, the first being named Esther.  Not every cook stove needs to be named, but for those who have had experience with such things they know that it is common knowledge that a Home Comfort is more than a wood burning stove.  Once you’ve cooked on one for any length of time you become so attached that it just naturally becomes part of the family.  We have had a wood stove in our kitchen ever since we’ve been married starting with my Great-grand mother’s old stove; but it had always been a secret desire to one day own a Home Comfort.  After 25 years of marriage Nancy spotted one for sale in a classified newspaper ad while we were in our car on a trip out of town.  She used a cell phone and called the number as fast as she could.  A nice older lady answered and engaged in a long conversation concerning her deep regrets in having to part with Esther after many years of relationship.  Esther was the name she had given her Home Comfort and she agreed to save her for us if we promised not to change her name.   On our return home I gathered four strong friends and loaded her in the bed of my pickup.  She was a dignified old girl (the stove I mean) and is now a part of the family.  At the time we got Esther we were building a small mountain cabin as a family.  Esther was given an esteemed place in the cabin kitchen and soon became the centerpiece of many family gatherings providing both warmth and wonderful meals.

Several years later after making the decision to build our new home at Timber Butte we thought about uprooting Esther from her mountain home so that she might be apart of our new kitchen.  Lucky for everyone Nancy discovered Eloise on Craig’s List.  She was complete with a side mounted hot water reservoir, (an accessory that is hard to come by) and was being sold in Helena, Montana.  As fate would have it I was scheduled to teach at the University of Montana the following spring. I called a close pastor friend of ours in Helena and asked if he could get four strong men to pick her up and store her for a few months.  He consented and Eloise has now become an important part of the Robinson kitchen and dining area.

Eloise is a Home Comfort that truly brings comfort to our home.  On this New Year’s Day we were very thankful as we smelled the fresh baked bread and felt the welcoming warmth that penetrated deeper than normal heat.