Last week I was gone on a ministry trip to Nicaragua for several days. I flew in late at night and Nancy picked me up at the airport. When we got back to Timber Butte she mentioned that she had to put the chickens in their coop for the night.  She had given them free reign of the garden the whole time I had been away. While I was gone a grasshopper infestation had moved into our area like the great plague of Egypt, and in an attempt to save the vegetables she turned the chickens loose for the first time.

I woke up early the next morning and after putting on the coffee headed outside to check on things.  As I walked across the hayfield to say ‘hi’ to horses the ground erupted with hundreds of jumping grasshoppers at every step.  We’ve had bad years with grasshoppers in the past, but this was beyond anything I’d ever seen.  Seriously, they were absolutely thick.

Last winter when we designed the chicken coop I installed a small chicken-sized gate from the run into the garden for the very purpose of allowing them to free range. We hadn’t used it yet however due to the fact that the garden hadn’t come to a state of maturity where they wouldn’t do damage to young seedlings.  Once plants are grown chickens ignore plants and become insect erradicators and soil enrichers.

Expectantly, I opened their small gate only to watch a dozen hens run into battle.  They began marching down the rows like trained commandos seeking and destroying the enemy as they went.   I don’t know how many grasshoppers a chicken can eat in one day but I couldn’t believe the consumption rate that took place in only a matter of a few minutes.  All through the day they kept at it, and with the exception of a few smarter grasshoppers that took refuge out of reach in the tops of corn stalks, the garden was hopperless. The chickens had indeed come to the rescue. 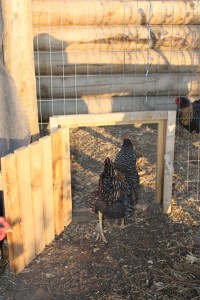