Looks can sometimes be deceiving 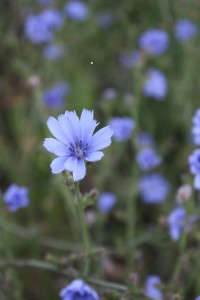 Things aren’t always what they seem. The road up to Timber Butte is often picturesque, especially at certain times of the year.  Lately the hillsides have been covered with light blue flowers that to the unknowing eye are breathtaking, especially in the early morning hours when they are in full bloom. Unfortunately, to those who are aware they are anything but beautiful.  These flowered bushes are the highly invasive noxious weed Chondrilla juncea, better known to the ranchers and farmers of southern Idaho as Skeleton weed.   This weed is nearly impossible to kill except with the use of powerful chemical herbicides during the late fall or early spring.  Skeleton weed is more adaptable to the hillsides and fields around the Timber Butte area than the natural grasses and vegetation and is becoming a serious problem.  It sinks a deep tap root into the earth which makes it almost impossible to uproot and it thrives best during hot seasons when other plants are competing for ground water.  There are fifty-seven different types of noxious weeds that have found their way into Idaho, all of which are becoming a major menace and a very real threat to the future environmental welfare of the state.  Skeleton weed however is on the top of the list for us. Wherever it grows grazing lands are lost (almost nothing will eat it), and hay fields are becoming chocked out.  Not only that, but the anatomy of a Skeleton weed plant makes it very difficult to kill with most chemical sprays because the upper part of the plant has no leaves.  Most chemicals are absorbed into the root system through the leaves.  Also, I might add, mowing Skeleton week is a lot like pruning fruit trees; it just makes them come back ten times as strong.   Skeleton weed is a clear and present danger.

Trying to keep things as organic as possible near our garden and orchard Nancy and I have had to figure out the best way to combat noxious weeds without the use of chemicals.  Although it has taken a tremendous amount of work we have done two things: hand pulled them and encouraged healthy plant competition that is able to overtake them.  These two processes have taught Nancy and me a couple of valuable spiritual lessons.

The other day Nancy came in and shared a revelation with me after spending the better part of a morning pulling weeds around the garden.  She said that the only way she could successfully remove the entire root of a weed was by soaking and softening the ground with water for an hour or so first.  She told me as she was weeding that the Lord showed her it is much the same with us.  Until we allow our hearts to become softened the roots of noxious and toxic memories and experiences break off only to later grow back stronger.  As Nancy was pulling out weeds in the softened soil (some with roots up to a foot in length) she found herself with a heart of thanksgiving for what the Lord was doing and wanted to do in the lives of the people she loved.

The second lesson for me didn’t happen in the garden but the hay field.  Two years ago Skelton weed was really getting a stronghold in one of our fields.  I asked our neighbor Craig Krosch if he would bring over his big plow and turn it over.  He did, and we replanted the field with Rye grass which does well in dry climates.  The next year the Rye grass came on strong and the following year even stronger.  It literally crowded out the Skeleton weed.  The truth I learned was concerning spiritual warfare and it was this – when the enemy (the devil) starts to invade your life or the lives of those you love the best defense is offense.  Using toxic chemicals that can kill good plants and eventually become absorbed into the soil and ground water is like fighting evil with more evil.  The better way to fight evil is to crowd it out with goodness.  This truth reminds me of Paul’s advice in the book of Romans where he counseled, “Do not repay anyone evil for evil. Be careful to do what is right in the eyes of everybody. If it is possible, as far as it depends on you, live at peace with everyone. Do not take revenge, my friends, but leave room for God’s wrath, for it is written: “It is mine to avenge; I will repay, “says the Lord. On the contrary:  ”If your enemy is hungry, feed him; if he is thirsty, give him something to drink. In doing this, you will heap burning coals on his head.” Do not be overcome by evil, but overcome evil with good.”