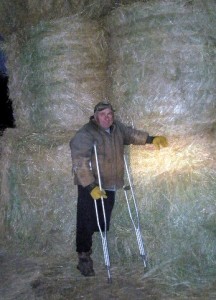 Craig stands with this years harvest of hay

Craig stands with this years harvest of hay

Living on Timber Butte has given Nancy and I the unexpected privilege of meeting some of the most amazing and unique people we’ve ever known.  Most of them are living here because they have been drawn to the challenges and joys of a country lifestyle as well as the solitude that these hills provide.  They are all capable and hardy people seemingly not needing anyone’s help but always ready to offer it.  A great example of this is Craig and Joan Krosch who live a half mile up the road.  Their house is the end of the line during the winter months; the place where the snowplow turns around.  They dry-land farm several hundred steep hilly acres putting up tons of round hay bails and raise some of the best homegrown organic beef and pork in the country. Last week an abnormal amount of snow fell for three straight days in a row followed by rain.  This combination of weather created deep wet slushy snow making our quarter mile drive exceedingly difficult to clear with my two-wheel-drive tractor.   Just before dark Nancy and I looked out our front window only to see Craig clearing our road with his chained up four-wheel-drive skidsteer.   Craig and Joan have become a major inspiration to Nancy and I not simply because they are so capable and willing to lend a helping hand, but because they are an example of people who refuse to give up no matter what life deals.  A few years ago Craig underwent several amputations due to an escalating battle with diabetes.  Each surgery took a little more of his left leg until it was completely removed.  Last spring Craig burned himself while cooking causing an infection that caused him to lose most of one thumb.  This was a major set back because the thumb is a necessary extremity for the ability to use crutches.  During that operation Craig suffered a heart attack nearly costing him his life.  Most people would have given give up with only a fraction of Craig’s health problems, but he has simply refused to stop living. While Nancy and I were visiting him in the hospital the day after his surgery he told us that he couldn’t die yet not only because Joan still needed him but we did as well.  He was right – Craig just has too much to offer all of us.  Last June when I was raking and bailing hay for the first time, Craig stood one legged on the side of my field coaching me on the fine art of windrowing hay.  The next evening I showed up at his house and presented him with my very first bail of hay, a trophy that remained in his front yard for the remainder of the season.  The truth is, we not only need Craig to teach us about farming and ranching but more importantly about the value of life itself and about the tenacity to live it fully no matter what it throws our way. Every time Craig has a physical setback he improvises.  His son who is equally as competent helps convert machinery adding hand controls so Craig can keep on farming his land and feeding his livestock.  Joan works by his side doing many of the things that Craig finds difficult.  They are an inspiration to everyone who meets them.  They love the life they have been given and when others might fall into self pity and defeat they choose not only to keep on going, but serve others at the same time.  They are a sustainable people, made for a sustainable life.