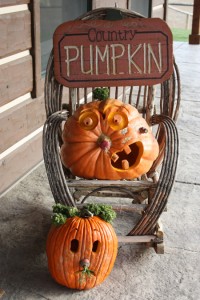 At what point does a decree become official by which a repeating event becomes a tradition?  I frankly don’t know, and maybe it doesn’t really matter anyway, but if I have the authority to do so then; I decree that The Annual Timber Butte Pumpkin Carving Party is now tradition.

I suppose most every tradition is started unintentionally or without the forethought that it would carry on year after year.   I’m quite sure the Pilgrim’s didn’t sit down to the first Thanksgiving dinner realizing that what they were doing would carry on for generations to come  eventually turning into a major national holiday.  Thanksgiving was simply a meal birthed out of thankful hearts. They were celebrating the fact that they were still alive after a year of dreadful suffering and struggle.  It was just the natural thing to do at the time and for that matter it still is.

Now please don’t think that I equate the annual pumpkin carving party with Thanksgiving by any means, it’s just that I was pondering the concept of what make’s a tradition a tradition.  Like, how many times does an event have to repeat itself before it is tradition?  The dictionary defines tradition as  “The passing down of elements or behaviors of a culture from generation to generation”  which makes me think the “Annual Timber Butte Pumpkin Carving Party” qualifies.

A year ago Nancy and I grew an over abundance of large pumpkins in our garden.  It was only natural that we wanted to put them to good use. We made pumpkin pies and pumpkin pizza out of the smaller ones, but saved the larger ones for carving.  We naturally thought of our granddaughter Hope when it came to the idea of Jack-O-Lanterns, and of our daughter Kate when it came to creative cooking ideas and so we invited them out to the ranch for a day of homemaking.  Hope brought a friend as she often does and so the day felt more like an event than just another get-together.  (See entry #126 – Oct. 11, 2009 – category – Country Living Reflections) (For pumpkin pizza recopies see Entry #131 – November 6th 09 Category – Homemaking).

We had so much fun we decided to repeat the event this year and invite more of Hope’s friends to join us. We moved the carving part of the party outside for obvious reasons. Clean up on the driveway would involve my power washer instead of scrubbing the kitchen floor on hands and knees like the year before.  We also incorporated some power tools this year like a power drill keyhole saw which we used to cut out the eyes and mouth and a saber saw used to cut out the top and other creative shapes. We even used my shop-vac to suck out the seeds and guts.  Kate saved the seeds for roasting and the rest was fed to the on looking chickens.

Needless to say everyone went home with a carved pumpkin for their front porch and a memory of a harvest party not easily forgotten. After the second annual picture was taken it was decreed that we could do it again next year with greater convictions of creative designs and carving methods. After all, it’s a tradition.