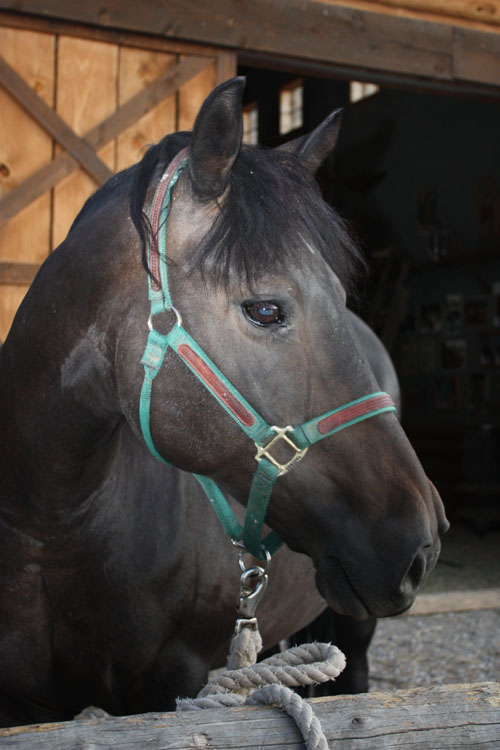 We weren’t looking for a new horse until we heard Tiara, a friend from church speak of her need to find a loving home for a big black gelding named Bandit. She told us about a long time friend of hers named Kernea who had raised and trained Bandit from a colt but due to the changing circumstances of her life as a busy wife and mother had reluctantly decided to find a new home for the horse she had lovingly cared for since her teens. Bandit is a beautiful black twelve year old, sixteen hand Canadian gelding with a long flowing main and tail.  He is beautiful on the outside but more importantly, sweet-spirited on the inside.

A year before, Nancy and I had lost a Buckskin gelding named Dusty (see entry #109- under Livestock category ) to a fatal foot injury and still missed his gentle personality.  It only took a minute to discover that Bandit possessed this same gentle attitude even though Kernea hadn’t been able to work him for quite some time due to pregnancy’s and the full time job of raising two energetic boys.

When Bandit arrived at Timber Butte everything was new for him, especially the freedom of open spaces and the introduction of three curious mares. It didn’t take long however for him to put everyone in their place and move to the top of the pecking order which he somehow managed to do without so much as a single bite or kick.  Riding him was another matter.

Because of his long sabbatical from the saddle and bridle, Bandit was afraid of every new thing. He shied at nearly everything and needed to be reminded once again how to respond to reign and leg controls. He was especially terrified of four-wheeler’s and other noisy machines. (Frankly, I didn’t hold this against him since I share the same irritation.) To remedy this problem I decided to take him on a long fifty mile ride from Timber Butte to High Valley and back. I was amazed to discover that although the ride took us over a high pass and the days were warm he barely broke a sweat.  It was on that ride that we became good friends and I lengthened his name to Buddy / Bandit.  For us he will always be known as Bandit because Nancy said that like a bandit he had stolen our hearts.