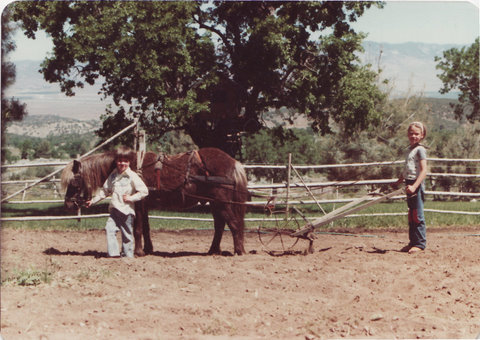 Pet the pony cultivates the garden

Left photo:Dusty was a pack horse. Right photo: Pet in the pet parade. 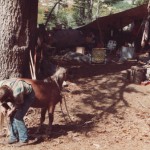 Shoeing Dusty in the back country.

Though our kids are in their mid thirties now, none of us will ever forget two special ponies that enriched their lives during their childhood years.  I’ve heard it said that Shetland ponies are the most contrary of all the animals God created.  It is said that they have built-in radar for low hanging tree limbs and other devious means used to maim and destroy small children.  I suspect these beliefs may be substantiated and factual in some cases, but not with Dusty and Pet – the two ponies that sowed fond and endearing memories into the hearts of our family.  I could tell stories of the uniqueness of these two special friends and the adventures they brought through years of their faithful service; but my intention is to make my story brief so I will get to the point. Dusty was the first pony to come to the old ranch and was responsible for teaching both of our kids not only to horseback ride with confidence, but to ride fearlessly.  Pet arrived a few years later complete with harness, wagon and a teammate named Friday.  I always thought of her as having the personality and endurance of a full sized horse that had somehow ended up in a pony suit.  Over the years we acquired several other ponies but none of them held a candle to Dusty and Pet.  Dusty was a rugged little guy.  He carried the kids far into the Sierra Nevada Mountains summer after summer as we worked on a trail crew forging out wilderness trails with our old friend Pat Armstrong who made his living as a government contractor. (See entry #18)  Dusty was not only ridden by Brook or Kate, but was used time and again as a pack horse.  We’ll never forget the summer we were blasting out a granite cliff with dynamite in an effort to cut a trail bed high in the Sierra’s.  The trail was far from complete and far too rough for normal horses and mules to negotiate.  We needed to transport a couple of cases of dynamite and various other supplies to the construction site.  Dusty was so small and so surefooted that he was the only animal capable of the task.  He leapt from bolder to bolder much like a goat scrambling up the difficult mountain slope transporting the dangerous loads without a mishap.   Through the years he earned our confidence and respect for his amazing abilities.  As the kids got older Kate soon outgrew Dusty and began giving her attention to Pet who was slightly larger.  Dusty provided company and a special kind of friendship to Brook who was three years younger.  Because the old ranch was isolated it didn’t provide the kids with much human companionship their own age so Dusty and Pet filled a needed void.

Not only was Pet larger than Dusty,  she was faster and stronger.  Katie entered her in local horse competitions when she was still really young.  As a pair they competed against full sized horses and much older riders, but won more than their share of blue ribbons.  Katie rode Pet fearlessly and with determination as Pet spun around barrels and poles with amazing agility.  One year in the annual pet parade Pet pulled a cart with both Kate and Brook, earning yet another first place prize.

I have no substantiated theology about pets going to heaven, but I’d like to think that these two unique ponies have already stood before the Lord and received special rewards for fulfilling their purpose on this earth.  I have a picture in my heart of the Lord giving them each a very large blue ribbon for lives well lived.  I can almost hear him saying, “You two ponies did everything I sent you to do; you accomplished your purpose – you were faithful and dependable servants that blessed people’s lives – well done.”

The truth is those are the words I’d like to one day hear myself.  There’s a lot to be learned from Dusty and Pet.  They will always be remembered with endearing favor by those whose lives they have touched; not because they were huge magnificent animals, but because they had good hearts and lived to enrich others’ lives.  They were kind, trusting and lovable.  They were steady, spending the majority of their lives simply being available – always ready to serve and bless, and always providing friendship.  Jesus said that it is greater to serve than to be served.  He said that the servant was the greatest of all.  He challenged us to invest our lives for the benefit of others; fulfilling the purpose that he put us on the earth to do.  Maybe our prayer should be, “Lord, make me like Dusty and Pet, that my life would be remembered as one that blessed those you gave me to love and to be loved by.”