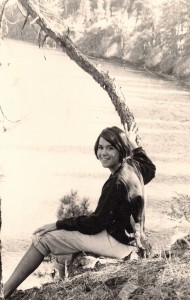 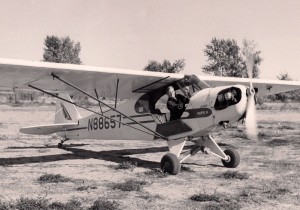 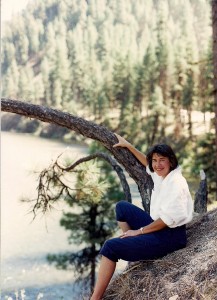 20 years later at the same tree

Today is February 14th and I can’t help becoming a little nostalgic as I reflect back on my first date with Nancy over forty years ago.  We met at a College of Idaho homecoming game in 1969 and I invited her to go flying with me the following day.  In those days I thought I might make a living as a pilot so I had been working on my commercial pilot license.  In order to build up the hours required for certification I talked my parents into buying a 1944 J3 Cub for $1200.  My argument had been that owning a small plane would be less expensive than renting one and paying the hourly rate.  As a result I had the exciting experience of exploring Idaho’s rugged mountainous country from the air.

Nancy accepted my invitation and the next morning I picked her up at her college dorm. We drove about five miles outside of town to Hubler Field. Hubler Field was actually a crop dusting airstrip with a couple of makeshift hangers built in a clearing of trees on the side of the Boise River.  There were only a few planes tied down next to the gravel runway, most of which were converted vintage biplanes fitted to spray and dust local fields.  I was excited to share the experience of flying with Nancy. At that time she was only eighteen years old but she had a magnetic personality. I fell in love with her the first time I saw her and desperately wanted to make an impression on her.  I helped her climb in the back seat (the J3 held two people, one behind the other), and showed her how to hold the breaks.  I think she was baffled at first wondering why I wasn’t getting in, not realizing that a plane of this vintage had to be started by hand-turning the propeller. I spun the prop through and after a few tries the small eighty horse engine kicked over and began to run.

To this day I can still remember what a perfect morning it was for flying.  The air was crisp and still as the rising sun began to warm that memorable September day.  After going through a short warm up and check list, we taxied out onto the gravel strip, revved the engine and a short distance later felt the small plane leap from the ground and start to climb.  Flying conditions were ideal and the little plane rapidly ascended out over the Boise River and across the open farmland beyond.  Before we knew it we had gained several thousand feet and the exuberance of the moment overcame me.  At that instant everything in my life felt right; I was in the company of the most charming girl I had ever met, I felt the exhilaration of flying on a perfect day and I could see the peaks of the mountains I had grown to love on the horizon.  I became so overwhelmed with joy that the moment got the best of me. I couldn’t contain myself and without really thinking I pulled the plane through a series of loops.  With a huge uncontainable smile I turned in my seat to see Nancy sunk as low in her seat as she could possibly be with eyes as big as saucers.  Laughingly I yelled, “You want to take the stick – it’s a perfect day to learn to fly?”

Well, you might think that would have been the end of what could have been a beautiful relationship.  I was twenty two years old then and what you would call “young and foolish” – but God’s mercy was with me.  As I look back on many of the things I’ve done in my life, it’s clear that he always had a plan for me that he wasn’t going to let my foolishness derail.  Thankfully, Nancy was a part of that plan.

As Nancy took a minute to compose herself she declined the flying lesson saying I was doing just fine, and then she put on smile on her face that could melt any warm blooded boy’s heart.  Instead of demanding that I return to the airstrip she agreed to head east and fly to a secluded grass airstrip on the Payette River in Garden Valley.  We were the only plane there that day and after parking on the side of the runway, I pulled out the lunch I had prepared and a large Bowie knife to cut the foot long sandwich.  It was a day that will always be fondly etched in my mind.

Twenty years later I surprised Nancy by taking her back to the same airstrip and served her the same lunch, cutting the sandwich with the same knife.  The little valley had changed dramatically but the river was the same.  On our first visit I had taken a picture of her overlooking a bend in the river,  I decided to find the same spot, thinking I would duplicate the memory.  It took awhile but after some searching we found the small crooked pine that she posed next to so many years before.

Next year will mark yet another twenty years of having Nancy by my side – but even after all this time, I’ll never forget that first day when I both terrorized and blessed her.  When Nancy tells the story of her first flight that began with a series of loops she always concludes it by simply adding, “… and I’ve been looped ever since”.

Proverb 18:22 says, “He who finds a true wife finds a good thing and obtains favor from the Lord.”  Nancy is, and always will be, my ‘good thing’.