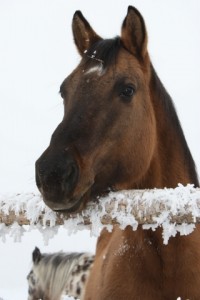 One day in 1998 my friend Merrill Cutler called me and announced that he had found the horse I’d been looking for.  My old saddle horse Joe had died of old age the year before and it had been my plan to get one last saddle horse I could ride into my late 70′s.  Among other things Merrill was a horse trader and I had asked if he would be on the lookout for a young gelding buckskin with a calm disposition that I could train while my body was still young enough to handle being bucked off a time or two.  I wanted a horse that I could grow old with and the day Merrill introduced me to Dusty I knew I had found him.

For the next three years we spent many hours together riding in the hills, crossing water, learning to negotiating difficult terrain and becoming good friends.  He had a lot of spirit but was never mean or dangerous even though I did end up on the ground once or twice.  By the time he was five I had taken him on several trips in the back country and had even used him to pack meat out of our elk camp.  He had become a trusted companion with a heart to serve in any way that he was asked.

The year Dusty turned six his life took a bad turn when a neighbor led a young filly down our lane in front of the pasture.  In his excitement Dusty reared up and somehow hooked a front hoof on the top of a wooden fence post causing it to rip half way off.  Without going into great detail I will simply say that it was damaged to a point that appeared beyond repair.  Our country vet Jay Green lived just down the road and came right over to give a prognosis and do what he could.  If Dusty had been a lesser horse I’m not sure what my decision would have been after learning the process for his healing and therapy, but we decided to give his recovery a chance. We flushed his wound and rewrapped his foot every day for the next six months in hopes of his healing.

After a painful year of healing for Dusty, his damaged hoof finally grew out and I decided to take him for a short trial ride.  I was elated when I saw how well he did and how much he loved being used again.  A few months later I had him shod in anticipation of using him for my fall hunting trip.  It appeared as if all our efforts had paid off until the very day of our departure. When I went out to load Dusty with the other horses I found him standing three legged once again.  At first I thought maybe my farrier had missed with a nail driving it too deep into the inner hoof wall. Disappointed, I pulled his shoe hoping it would fix the problem and loaded an older mare in his place.

When I returned a week later I found Dusty in trouble again.  We immediately called Jay Green again and he gave us some devastating news.  He told us the inside of Dusty’s hoof was full of infection and that if he was to have a chance of survival we would have to surgically remove a large portion of the outer wall and allow it to drain once again.  If the surgery was a success we would have to repeat the long process of changing the dressing morning and night.  Thankfully, it was successful but in order to keep Dusty off his feet he was sedated for weeks. Day after day he looked like a drunk sleeping off a hangover in the shavings of a stall in Jay Green’s barn.  In time he recovered to the point of wanting to stand up and that caused yet another trauma. When standing he put all his weight on his good front foot which caused it to founder or break down.  Unfortunately the healthy foot became worse than the recovering foot and the decision to put Dusty down had to be faced for a third time.  In a state of defeat we asked Jay what he thought we should do.

Now I come the point for telling you this long painful story.  Jay told us two things we’ll never forget.  He told us that many vets would most likely counsel us to give up at this point but if Dusty were his horse he’d keep on persevering.  He also said that he’d rarely seen a horse with such a will to get well.  Dusty somehow knew that we were doing everything we could and because of it he was doing everything he could to cooperate.  He was a loved and valued animal and I think he sensed it.  The second thing Jay told us was that in the past year his father had been diagnosed with terminal cancer and everything looked pretty hopeless.  He said that his father had a strong will to live that the doctor treating him wouldn’t give up on trying to cure the cancer.  Everyone decided to press on and do everything that could be done and his father began to heal.  As a result of that experience Jay built a conviction not to give up on what sometimes seemed impossible.  And so the decision was made to do yet another surgery on Dusty’s other foot.  The recovery was long and hard, and without Jay’s benevolence we would never have been able to afford the expense.  Dusty spent the entire winter laying in his barn, standing only when it was time to eat.

That winter nearly every afternoon we would stop by the clinic on our way home to check on Dusty and give him a friendly pat.  As we pulled up one of those times Jay came out to meet us and inform us that a guy in a wheelchair had stopped by earlier and asked if he could see Dusty.  It was Merrill Cutler.  (Merrill had been shot in the Vietnam War which left him paralyzed.) Jay said that he watched as Merrill wheeled himself up to Dusty’s stall and climbed down next to him.  He said that to his amazement Merrill laid hands on Dusty’s shoulder and began to pray for his healing.

Seven years have passed since those days of Dusty’s suffering and restoration. Today, he is alive and well – a wonderful horse that still loves to be used.  He has become Nancy’s favorite horse to ride. He also pulls a buggy, works in a team and cultivates the garden pulling a harrow.  There is nothing that Dusty isn’t willing to do. His first injury has had a complete recovery, and although the foundered foot needs to be consistently fitted with a therapeutic shoe, he is amazingly sound.  The whole ordeal has literally taken years, but everyone feels that it has been worth it.

We have learned a great deal about the sustainability of hope and healing through our long difficult experience with Dusty.  We’ve come to understand just how important tenacity and perseverance is and how it pays off in the long run.  The apostle Paul once said, “…but we also rejoice in our sufferings, because we know that suffering produces perseverance; perseverance, character; and character, hope. And hope does not disappoint us.” [Romans 5]  We also learned how powerful the will to get well is in the process of healing.  In John 5, Jesus encountered a man at the pool of Bethesda in Jerusalem who had been crippled for thirty eight years.  The first question Jesus asked him was, “Do you want to get well?”  It seems a simple and obvious question, but the reality is, it was very profound.  Dusty wanted to get well – and through the love, care and compassion of others he not only got well but became functional.  This is a lesson that we can all glean from if we hope to be a healed, functional and sustainable people.

Packing out of elk camp.

In the Sawtooth Wilderness before the injury.