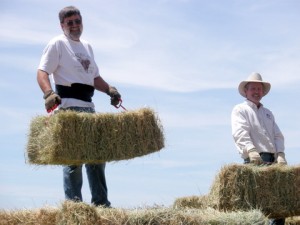 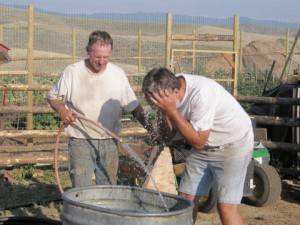 As Nancy and I moved ahead on our vision to develop a sustainable farmstead an amazing thing began to occur that we weren’t expecting. It seemed to us like the Lord was bringing a unique new group of people into our lives that shared a like heartedness for this type of lifestyle. One example of this occurred one day when I received an email at my church office from a guy named Duncan.  I had no idea who he was, but his short communication captured me.  It seemed like whoever was writing me had known me for a long time. He said that he knew of a place where I could find and cut cured firewood some thirty minutes from where I lived.  The letter revealed a number of things; he knew about where I lived, he knew that cured firewood would interest me, and he knew that I liked to get my own firewood.  In the busyness of life I soon forgot the email and dismissed it from my curiosity.  Six months later I received another note saying he knew where I could get some good square granite building rock and that he had a great trailer and winch if I needed help getting it.  His timing in writing me that note was amazing in the fact that I was planning to build a granite retaining wall around my barn and root cellar. (see entry #12)   He left his phone number so I decided to give him a call.  On the other end of the line came a voice that was full of life.  I knew immediately that this was a person I wanted to know.  Duncan was interesting and fun.   He and his wife Irene had been hay farmers for years until they decided to enter public education.  I had been a secondary school teacher for twelve years before entering the ministry and realized that we had a lot in common.   They had been attending the Vineyard, (the church where I pastor) for a couple of years, but because the church is large I had never had a chance to meet them.  In the course of our first phone conversation Duncan said that he missed bucking hay after leaving farming so many years before.  Nancy and I had about six tons of hay in the field right then that needed picking up and so I welcomed his enthusiasm and eagerness to lend a hand.  I remember the morning Duncan arrived for the first time.  I had no idea what to expect, but the minute I saw him I knew he would be a long time friend.  I love people who can make me laugh and Duncan had the gift.  That was a day of productivity and joy.

If you’re at all familiar with the Bible you may know the story of the first church in the book of Acts.  One thing that was characteristic of those first Christian believers was that they really enjoyed each other.  In Acts 4 it says that they were “one in heart and mind” and they looked out for each others interests.  They shared things and helped each other with great joy.  It’s a picture or real community that happened because people shared the common denominator of a relationship with God. That was surly true of the relationship that quickly developed between us and Duncan and Irene.  Not only did we all share a common joy for country living, but we shared a value for the creator that made it possible.

Duncan still writes Nancy and I letters.  He gives us council on when and how to plant alfalfa, what to do about noxious weeds, and even exhorts us to not work ourselves to death taking a day off now and again. Once he wrote, “I still haven’t figured out when you have a weekly day of rest! Definitely not on Saturday, Sunday or Monday.  You are wired with a different battery than I am.”

Duncan and Irene have become true friends that care about our vitality and understand our makeup.  They (like so many others) share with Nancy and I “one heart and one mind” in the things that really matter to us.