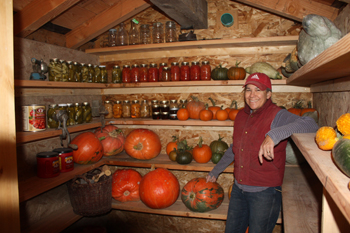 In December of 2008 I wrote a series of blogs concerning our experience building a new root cellar here at Timber Butte.  (See Archives for December 08 – Entries 10-13)  I shared how I used old discarded car tires filled with compressed earth for the supporting structure.  I also told the story of building our first root cellar in 1972 on the old original ranch in Robinson Canyon out of granite rock. It is hard to believe that a year has gone by already since the completion of the new cellar but after experiencing its effectiveness through four seasons of use I thought it might be a good idea to give you all an update.

For the most part we have been quite pleased with its operation, especially with its constant temperature but we did run into an unexpected problem with the humidity level.

During the past year the inside temperatures fluctuated from just under forty degrees in the dead of winter (when outside temps were in the single digits) to about fifty degrees in the heat of summer (when the outside temperature was bumping a hundred).  We were fairly happy with this result but are hoping that by planting shrubs on the cellar roof this fall we may defray a little more of the penetrating summer heat next year.  Not only will the plants help insulate and deflect heat, but the water they require will keep the soil moist and thus cooler as well.  The inside humidity was a different matter.

Last spring we experienced several huge downpours of driving rain.  I hadn’t anticipated the amount of water that built up on the already saturated ground after some of these cloud bursts.  It was amazing and it enabled some excess water to run down the cellars steps and under the exterior door.  I had constructed a drain between the outside and inside door which ended up clogging with debris thus causing the excess water to overflow the threshold and soak the inner adobe clay floor.  As you might guess this caused the humidity level to rise to 100% which lasted for the better part of the summer; this was even after leaving both doors open in hopes of airing things out for a month.  Mold started to grow on the outside of Nancy’s metal canning lids and the things that were packaged in cardboard were ruined.  It was a discouraging problem that we had to rectify.

In an effort to bring down the humidity and keep the problem from reoccurring again the following spring we made four improvements.  First, I poured a higher concrete curb around the outside stairs to re-channel future runoffs.  I also installed several new outside drains in the yard to trap and carry flood water away from the areas around the cellar door as well as enlarging the existing inside drain.

Secondly, we installed a six inch vent pipe through the ceiling to increase air circulation which worked very well.  After doing some reading I realized this should have been done in the beginning.   And lastly, we poured loose pea gravel on the floor about four inches deep.  Gravel enabled moisture to wick off of the clay floor and accelerate the evaporation process.

Most root crops do best in cellars that maintain about a 60% to 80% humidity level which we have now managed to achieve.  The problem has been resolved and Nancy cleaned the mold off the lids with vinegar and is again canning all kinds of wonderful new things for another winter of storage and eating.