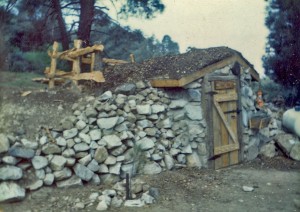 The “Hole” on the old ranch.

When Nancy and I moved onto the original old ranch after we were married in the early 70’s (See about us) one of the first projects we attacked was to build a root cellar. Living without electricity made having a place to store perishable food a necessity. Not only did I need a place to hang and cure my annual deer, but we needed a place to keep Nancy’s canning and root vegetables from the garden. It was decided that I would dig a large hole into the mountainside behind the cabin in which we would construct a rock and mortar room that would then be reinforced and covered over with earth. For weeks on end I would get up, grab my pick and shovel and say to Nancy, “I guess I’ll go out and work on the hole. When the shelves were set in and the door was hung in place we never stopped referring to the root cellar as the “Hole”, a name which stuck from that time on.

Years later as we started walking the Timber Butte property and envisioning the lay out of our new homestead (See entry #1) we again decided a root cellar would be beneficial. At first we thought about incorporating it into the house plans as a basement until we discovered that the house would be built on a granite knob that was extremely difficult to excavate. Harvey Church advised us against that idea (See entry #3) and so we decided to replicate the old “Hole” in a hillside just outside the future kitchen. [This week I will dedicate our blog to the step by step process of “hole” or root cellar construction.]

Our new root cellar is far superior from the original one. Nearly forty years has passed since those early days and if allowed, time and life experience can be a wonderful teacher. There are two grave errors I find we as people often make in our humanness: either we resist learning from the mistakes of the past which causes history to repeat itself in our lives, or worse yet, we deny and reject the past altogether making a whole new set of mistakes that are often worse. As for me, I want to value and grow out of the richness of the heritage that is behind me while learning from the many mistakes that were made. As you might guess, I’m speaking of more than digging holes but rather of becoming a whole person. Forgiveness is the only tool I know of that can provide the freedom to move ahead in health. It’s the only thing that can turn the past into a truly vibrant functional future. I love the way the Apostle Paul put it in Philippians 3 where he said, “Not that I have already obtained all this (meaning a functional Christ-like life), or have already been made perfect, but I press on to take hold of that for which Christ Jesus took hold of me. Brothers, I do not consider myself yet to have taken hold of it. But one thing I do: Forgetting what is behind and straining toward what is ahead, I press on toward the goal to win the prize for which God has called me heavenward in Christ Jesus.”