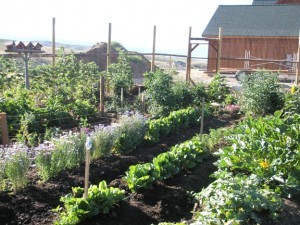 Here is our garden, growing in the manure.

As summer came to an end our other new neighbors, Craig and Joan Krosh dropped by to announce that our friend Al Gibron would be helping them that day deliver a rather large house warming gift. When Al arrived he was driving Craig’s dilapidated old dump truck piled high with steaming cow manure which Craig was cleaning out of his pens that morning. Five more loads followed. They were piled high, one on top of the other forming a great smelly, nitrogen mountain. The Krosh’s generous gift steamed under the snow pack through most of the winter months. When the ground finally began drying to a point of supporting a tractor I spread and disked the pile deep into the ground in preparation for a first vegetable garden. Wonderful things sometimes come in smelly packages and true growth often requires a bit of life’s manure. Isn’t it true that God often works best in the organic matter of our lives – it’s one of his greatest gifts.