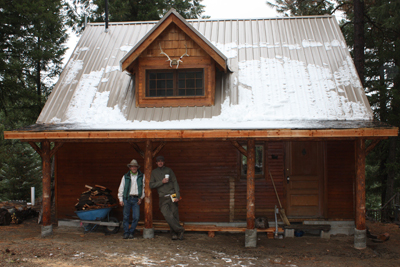 A couple of weeks ago my son Brook and I were pondering the front entrance of our family cabin.  Brook was saying that it looked somehow incomplete and that a porch would make it look a whole lot better.  I agreed – and so we decided to construct one before the first October snows hit the Idaho mountains.  The local weather forecast predicted a first severe winter storm to arrive October third and so we gathered our materials, took a day off in an attempt to beat it. Luckily we had poured cement footings for the upright posts two weeks before and so met at the cabin on a Friday evening with the expectation of completing the main structure on Saturday.  (The weather was predicated to come in by Saturday evening.)

Saturday morning we located two tall straight furs in a dense stand of trees about 100 feet above the cabin.  Being that they were green and heavy we wanted to fall them in a place that they could be drug downhill. One tree would serve as a 8 inch – 26 foot main beam and the other would be cut into four seven inch – seven foot posts.  Once they were felled and limbed we cut them to their desired lengths and attempted to drag them home.  They were a lot heavier than they looked, but only as the Lord could provide our good friends Elliot and Marilyn happened to walked up our lane just in time to lend a hand.

We laid the posts horizontally on saw horses and while I cut the ends of the posts off square and drilled them to sit on 5/8th inch rebar pins that stuck out of the concrete peers Brook and Elliot peeled off the bark with a draw knife.  We set the posts and proceeded to notch the main beam so that it would sit flat on the tops of the posts.  This is a little tricky because each notch is set at a different depth depending on the tapper of the log and any unwanted bow that it may have.  We determined their depths by tightly stretching a string from one end of the beam to the other and marking it accordingly. This done we muscled up the beam and set it in place.

Brook pounded 12 inch spikes through the main beam into the posts after predrilling some guide holes.  Then after getting everything set into plumb and level we set the rafters and nailed 1X12 sheeting across them.  We used true one inch by twelve inch ruff cut planks that we purchased from a locally owned saw mill.

Our goal had been to frame in and cover the project with roofing paper before the weather turned so that the finish work could be completed even if it decided to rain or snow, but just as Brook climbed up the ladder with a role of tarpaper it started to rain.  The last hour of work was a bit miserable but Nancy had hot coffee and a great dinner ready for us as we finished.  It was a great day; the kind of a day you always remember.

The next morning we woke up to sleet and snow which didn’t let up for the entire day. Not letting it deter us we managed to stay under cover and relatively dry as we set the 45 degree post bracing and finished anchoring the rafters to the house in a more substantial way.  We hope to install the metal roofing and finish the decking before real winter arrives.

Peeling off the bark