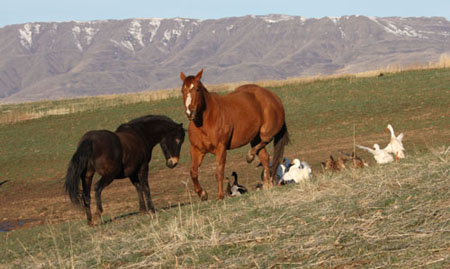 Freedom is an attribute of the health of uninterrupted creation.  In the beginning it was the way life is intended to be. When we experience it we feel right; not only in the welfare of our physical bodies, but in the liberation of our spirits.  To be imprisoned is to suffer because we weren’t created to be confined or in bondage. This is a simple truth that most of us recognize not only in our own being, but for those of us who are country livers we see it daily. We see it in the behavioral actions of all created things, even among our barnyard friends.

I read a report recently that revealed an alarming fact.  In the 1930’s one out of every four American families lived on small farms and were responsible for producing the majority of our nation’s food supply while today there is less than one in one hundred.  Not only so, but in the present day, some eighty years later, three-fourths of our food supply is produced on commercial factory farms, where I might add, everything is controlled, manufactured and animal life is raised never experiencing freedom of any kind.

In the morning I have a routine.  It’s a routine that I’ve fallen into after years of living in the country with lots of animals to care for.  I awaken early, put on the coffee, feed the dog (who knows the routine well), put on my rubber farm boots, and head for the barnyard where I commence to open corral gates and pen doors for the morning liberation of horses, cows, chickens and ducks.  Everyone goes free after a night of purposeful captivity for the sake of protection from looming predators. It’s an outrageously  noisy time when the goose and rooster sound the alarm of liberation, ducks quake in jubilation and horses buck and snort as they gleefully run into the adjoining open pasture.  It’s sincerely a joyous time on the homestead for everyone. The chickens run for the corral where they enthusiastically pick through the previous nights treasured manure piles, the ducks dive into favored water seepages and mud wallows while the goose nibbles shoots of fresh new foliage refreshed with morning dew. Every barnyard inhabitant seems genuinely overjoyed with the freedom of another day and all present communicate the exhilaration they feel with noise and action that anyone present could not help but understand.  It’s the way, even domestic animals, are meant to exist, and because of it the products they produce for us (eggs, milk & meat) are healthier, tastier and more life giving. Everyone benefits.

America needs the revitalization of the small farm. We need to create a culture where words like “free-range”, “organic” and “sustainable” are once again not related to the trendy diets or an elite segment of people who can afford to spend extra money for what is now being referred to as “real food”, but where real food is the normal and natural way of doing things once again. There is no question, returning to a system of food production like this is a big order.  Some would call it unrealistic and even impossible in a world that is annually growing in hunger.  Yet, nothing is impossible for those who believe it is a God given responsibility to care for the hungry and poor (Matt. 25) not just with a quantity of food that fills the belly, but a quality that nourishes and restores the body.  From my vantage I see many who recognize the ultimate long range solutions to world hunger are found and implemented through the grassroots of people movements rather than through the implementation of more government subsidies and temporary handout programs (which in fact are necessary bandages in the short run).  Those in this camp might agree that the ultimate answer lies in two basic concepts: First, the old adage that compares giving a man a fish rather than teaching him how to fish (an issue of education and information – A responsibility, especially for those who accept God’s commission to care for broken humanity), and secondly, a faith in the fact that God’s M.O. is for freedom and health and that freedom is at the root of the solution.

God’s heart for liberation isn’t just for mankind but for his entire creation, yet man is always the recipient of a creation that is functioning in accordance to His plan. Romans 8 tells us that the creation suffers (even groans) when man is out of God’s will or way of doing things. In this regard some would say that much of today’s food production is motivated more by the monetary gain of a few above doing what is right for the earth and its struggling inhabitants. If a method of food production is undermining the environmental condition of the earth (water, soil, climate, etc) then it is endangering the sustainability of long term food availability. Romans  also tells us that the very welfare of the creation is directly tied to man’s sin and bad choices and in the long term everyone (especially the poor) will pay a horrible price.  “For all creation is waiting eagerly for that future day when God will reveal who his children really are. Against its will, all creation was subjected to God’s curse. But with eager hope,the creation looks forward to the day when it will join God’s children in glorious freedom from death and decay. For we know that all creation has been groaning as in the pains of childbirth right up to the present time. And we believers also groan, even though we have the Holy Spirit within us as a foretaste of future glory, for we long for our bodies to be released from sin and suffering.” (Romans 8:19-23) In the end, if we knew the truth concerning both who God really is and what His perfect will for us is (and if we were obedient to it), the world would experience the kind of freedom he has always intended.  It was Jesus himself who said, “And you will know the truth, and the truth will set you free.”(John 8:31)

Small farms aren’t the answer for a world of greater freedom, God clearly is, yet those who have experienced what I’m talking about can understand that seeing freedom played out every day, even in a simple barnyard, is a picture of how things should and could be.