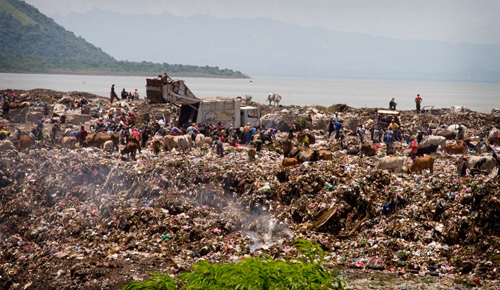 My plane landed late that evening in Nicaragua and after clearing customs was immediately comforted as I recognized my old friends’ crazy smiling faces through the terminal windows in the midst of the chaotic crowd. After some brief hugging and hand shaking in the open humid topical air we loaded into a van and headed an hour out of the city to the orphanage they had all worked hard to establish. On the way they shared what they had been doing through the missions’ partnership, and about the political, social and economic condition of Nicaragua. I learned that the unemployment rate was over 50% and the extreme poverty that resulted was having a devastating ripple effect on a country that had once been considered one of the wealthiest in Central America.

Since I arrived a couple of days before the conference started I had the chance to hang out with my old comrades and experience what they had been doing. On one of the days they took me to visit the Managua city dump which provides trash disposal for some two million people. Visiting a dump in a developing nation isn’t something that most tourists would do; but if you want to discover the truth about a society’s condition it is the most revealing place to begin. It tells the story of the cycle of poverty in a way that would both shock and devastate people who aren’t spiritually prepared to see it. As heartbreaking as it was, what I saw that day in Managua is not unique; it is a scenario that is reproduced in nearly every city in the developing nations of the world. Thousands of people literally spend their entire lives in these dumps; some never even seeing the outside world. This is their entire livelihood. Their houses are built from what can be savaged from the refuge; their food comes from its waste; and whatever income is made by cashing in and recycling the debris.

We stood on a hill that rose above a landscape of miles of garbage, observing truck after truck dump its towering loads. With every load literally hundreds of people – men, women and children – stormed the trucks hoping to be the first to extract the precious resources that the rest of their society considered useless garbage. We were told that it wasn’t uncommon for people in their zeal for trash to end losing their lives after becoming buried alive under the discarded piles of rubble. Looking from our vantage point I could only think of what hell must be like. Here and there methane gas pockets erupted in flames, which was another common source of devastating injury or death to the people who inhabited that place. Everything was polluted far beyond anything I had ever seen. Children swam and bathed in a small lake that was not only surrounded by trash, but had decaying rubbish floating in it. As I viewed the hopeless scene before me, God was re-breaking and renewing my heart for suffering humanity – reminding me again that I couldn’t hide behind busyness, feeling overwhelmed or extreme weariness. I had to do something. I could never cease being an active participant in his Kingdom. I could not give up. I had to collect myself and muster up the courage by his Spirit to continue to run the race to the end.