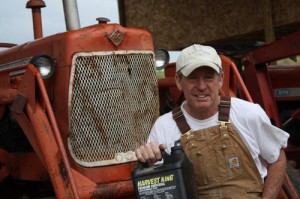 Over ten years ago I bought my first real tractor.  It wasn’t much to look at, but it was a bona fide Allis Chalmers 1952 D17 farm tractor and it ran great.  The guy who sold it to me was a gentleman rancher who wanted something a little more modern and easier to use so he not only sold me the tractor, but all kinds of implements; a disc,  two mowers, a harrow, a plow, a scraper blade and a number of other  miscellaneous pieces of farm equipment.  I was elated to have procured so many new toys even though I knew little about tractors or farming.

Over the years I became comfortably familiar with the operation of the tractor even though it was worn from years of use and sometimes temperamental.  The one thing that was most difficult about it was that it was hard to steer.  To my knowledge it had never been equipped with power steering and operating it in close quarters around the house or barn was a challenge.  When I had a load in the bucket the extra weight on the front tires made it nearly impossible to turn unless the tractor was moving.  On days that I used it a lot I would literally get muscle soreness in my chest and arms, the same as if you had overdone a weight lifting program at the gym. It wore me out.

Not long ago a friend named Tom Gatfield came over to help me do some work on the ranch here at Timber Butte. I was using the old tractor to move some empty fuel tanks while he stood off at a short distance watching me.  As I lifted one of them with the bucket and started maneuvering it to another location, he observed me straining to turn the steering wheel and I couldn’t help but notice a curious and somewhat bewildered expression on his face.  As I set the tank down he yelled over the noise of the engine asking, “What’s wrong with that tractor of yours?”  I responded by shouting back, “It doesn’t have power steering!”

Tom had been raised with tractors and large farm equipment all his life and mechanics was second nature to him. He tilted his head as if to have a closer look at my old Allis Chalmers and being careful not to make me feel totally stupid simple said, “Are you familiar with how to fill your power steering reservoir?” Turning off the engine, I responded, “I didn’t even know it had one.”

Tom showed me how to remove the front grill and locate a small filler tube I had never seen before.  Later that day I drove it up to my shop and poured nearly two gallons of tractor hydraulic fluid down the small opening, replaced the cap and started up the engine.  It took a few minutes for things to start working, but lo and behold I had power steering.  It changed everything – it was like I had a whole new tractor and I didn’t know how to respond.  On one hand I was more than elated at my discovery, but at the same time I felt mad because I had been struggling with it for over 10 years. I was upset because it had never occurred to me that the luxury of power steering was even an option.

Living without God in your life is just like my tractor experience.  You can steer your way through life on your own power if you want to, or you can fill your tank with God’s Spirit and let him shoulder the burden.  Discovering the power of the Holy Spirit later rather than sooner often causes a similar reaction in people that I had when Tom finally told me the truth I had somehow missed.  When people discover overlooked truths they are filled with joy at the discovery but often angry it took them so long.  What I realize now is that I had become so used to the struggle with my tractor that I came to believe that it was just the way life is. I simply didn’t know there was a better way.  I hadn’t thought to ask if there was a hidden truth I didn’t know.  Maybe I was just too proud.

Every human being is equipped with a hydraulic power steering reservoir but it needs to be filled.  Being filled with God’s presence is not only a choice, but a discovery process that is often found only in the struggle of trying to live without it.