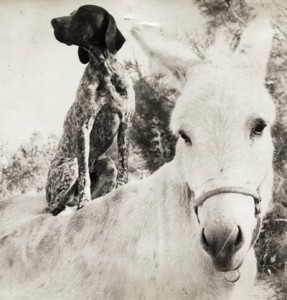 Back in the 60′s the folk singer Joan Baez wrote and sang a song about her old dog named Blue. She sang, “Well I had an old dog and his name was Blue – Betcha five dollars he’s a good dog too”.  The song went on to tell of her adventures and life with Blue until he finally died where she sang, “Now, Old Blue died and he died so hard, made a big dent in my backyard.” Her song was always special to me because of a favorite old dog Nancy and I named Blue.

We brought Blue from Idaho to California with us shortly after we were married in 1970.  He was the dog that took the place of the children we didn’t have yet and he was a total character.

We arrived at our old family homestead in the middle of winter and had to pack our belongings a quarter mile through three feet of snow to the cabin.  Blue was so small we had to carry him and when he got there he didn’t want to leave the cabin until the spring thaw.  He was short haired and during the night the house got so cold that he pawed away the coals in the big fireplace and slept the night in the ashes. It was common to hear his small yelps in the night when he rolled over onto a hot live coal.

As Blue grew so did his unique personality.  We had been given an old mule at the time named Sneezy who had large rolls of mule fat causing his back to be flat. Blue enjoyed sitting on Sneezy’s back so that he could have a bird’s eye view of things.

Blue loved the ‘girls’ and would wander five miles to visit one of his flames.  One of his favorites was a sweet little pointer named Missy who was the family pet of our good friends Chris and Kathy Wangsgard.   Chris became fairly irritated with Blue’s visits which caused him to dress his little dog in female underwear to preserve her innocence.  On one such visit Chris decided to put Blue in the back seat of his 65 Mustang and drive him home.  The next day Blue showed up again and when Chris tried to scare him away Blue jumped through the window of his car and sat in expectancy of another ride home.  That infuriated Chris who now realized he was being taken for granted.  He opened the back door of his car and ordered Blue to get out. Blue wouldn’t budge which caused Chris’s anger to escalate to a new level.  Furiously he reached into the car in an attempt to pull Blue out at which time he was met with snarling and snapping teeth. Not easily beaten Chris went to the house to get a weapon and returned with his wife’s kitchen broom. He opened both back doors with the idea that he would push Blue out the far side.  Blue took hold of the broom and yanked it from Chris’s hands.  With that Chris closed the doors, climbed into the driver’s seat and chauffeured Blue home once again. Chris told me later that he pulled up the our gate, got out and opened the back door of his classic Mustang and Blue happily and agreeably jumped out and trotted up the driveway towards home.

I don’t have any conclusive biblical proof to assure you or me that pets go to heaven and even if they do, I don’t know if Blue would have made it.  He had a lot of repenting to do from all the sin in his life.  He even died in the act of sin when he secretly stole chicken bones out of the trash. But, no matter what he did we all really loved that old dog.

“When I get to heaven first thing I’ll do,
Pull out my horn and call old Blue…
I’ll say, “Here Old Blue come-on dog”
“You good dog you.”

I hope Joan was right. Knowing what I know about the nature of God, I would like to think she is.