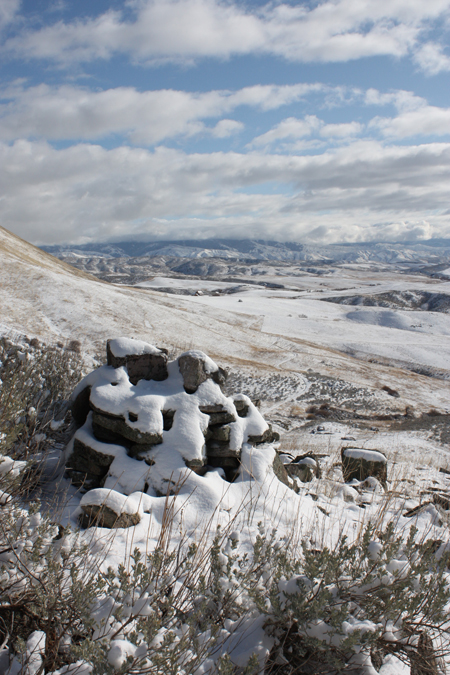 Not too long ago Nancy and I decided to take a break from our normal work routine to take a long horseback ride in the hills near our home. On our ride we happened upon what looked to be a very old grave site marked by a stack of squared off volcanic rock. The marker had been carefully placed on the edge of an outcropping of rock that protruded out from a mountain slope. The spot had obviously been chosen because of its panoramic view of the upper Weiser River basin.  Discovering it made me recall a story I had heard from my friend Harvey Church.  Harvey’s family homesteaded in the area in the early 1900’s and has been ranching here ever since.  He not only has his own stories to tell, but knows quite a bit about the local history.  Once he told me the story of a last Shoshone Indian chief named Chief Eagle Eye who’s last desire was to be buried in a place where he could overlook the land he had loved.

In the late 1800’s Eagle Eye had become famous for his uncanny ability to evade the aggressive and brutal attacks of the United States Military as well as miners and settler who pushed into the Idaho territory.  His small tribe had been one of the only remaining native Indian bands able to avoid capture during the General George Cook Snake River War Campaign and the 1879 Sheepeater Indian Campaign, which marked the last two military efforts to force all southern Idaho Indians on reservations.

Eagle Eye’s small group of 10 warriors and 18 women and children disappeared into the Idaho wilderness during these seasons of conflict, but always returned to the Timber Butte hills because they provided large quantities of obsidian needed for arrow points and other tool manufacturing.  In his later years he encouraged his few remaining people to merge into white culture and become engaged in the early logging industry that had developed in the Dry Buck Basin in the mountains east of Timber Butte.  Many of his people successfully did this and as a result became one of the only bands of Shoshone in the state who managed to avoid the Fort Hall Indian reservation.  Eagle Eye died in 1896 making a last request for his sons to bury him on the side of his beloved Butte.

It’s hard to say if the grave site we stumbled onto that day was the resting place of this amazing old leader. It may or may not have been, but as I stood there looking over valley below I couldn’t help but think that had I been him this would have been the very spot I’d have chosen.