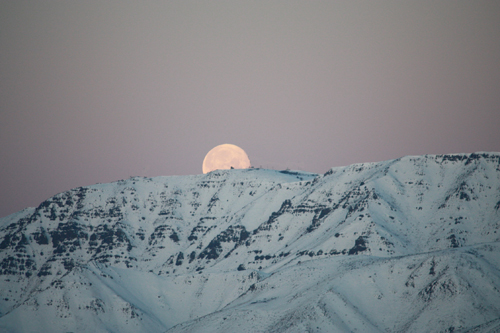 Recently I watched the moon descend in the cold evening sky, slowly disappearing behind Squaw Butte. It caused me to stop and consider the miracles that so commonly happen in all of our lives.  I considered the fact that so many people see unplanned life experiences as being results of random happenstance, coincidence or even luck. In doing so, they often miss the richness of everyday life.  Personally I don’t think there is such a thing as an accident when it comes to the big plan of God.  I believe he divinely puts people and events in our life path for the purpose of bumping us into trajectories that will lead us to his “good, perfect and pleasing will” [Romans 12:2] .  Most of these things, the experiences we encounter or the influential people we meet along our journey, aren’t fully appreciated until later when they can be observed in retrospect.  Seeing our experiences in hindsight requires taking the time to reflect and recognize the sovereignty of the greater plan.  Viewing life in this way gives depth and meaning that motivates us to take nothing for granted. It prompts those of us who see it that way to give thanks even for the difficulties and struggles.  That’s just what I was doing when I watched the moon go down the other evening. Seeing the moon that night caused me to recall a chance relationship that had miraculously fell in my path – this encounter was with a guy who had actually walked on its surface more than once.

I met David Scott in 1973, two years after he had commanded the Apollo 15 spacecraft that made human history in 1971.  I was a junior high school teacher in the 70’s, teaching in the MGM (Mentally Gifted Minor) program at Parkview Jr. High School in Lancaster, California.  Lancaster was the closest town to Edwards Air Force Base, the famous center where much of the early pioneering space program took place.  One day in 1973 I was called into our principal’s office for a closed door meeting. There I met Lurton Scott, wife of Commander David Scott, for the first time. After being introduced I was told that I would be receiving the Scotts’ twelve year old daughter as a student.  Lurton was there because she wanted her daughter to be treated as normally as possible by both staff and other students even though her father was a well-known national hero and celebrity.   Apollo 15 had been a special mission considered by NASA to be the most successful manned flight ever achieved. David’s lunar module, Falcon, remained on the lunar surface for 66 hours and 54 minutes (setting a new record for lunar surface stay time). He had logged 18 hours and 35 minutes in extravehicular activities conducted during three separate excursions onto the lunar surface.  NASA labeled it the Apollo 15 mission.

Not having television reception at our old ranch I knew little about the scientific endeavors of the Apollo flights but did recognize David for being the first to drive the Lunar Rover across the moon’s surface.  He was a hero in our day, and living near the Edwards test center made us all the more aware of it. Being entrusted to teach his daughter and later his son was a great honor.

I was teaching in the mentally gifted program at the time and they encouraged me to get my students off campus to what referred to as “quantitatively differentiated curriculums”.  I often used our old ranch homestead as a classroom.  Tracy Scott was a brilliant young student.  Even at an early age she had a certain charm and poise that was unusual.  Her enthusiasm for my class made teaching a joy and helped motivate me to be creative in my teaching style.  While covering a course on the American West I decided to develop a course of study I called “Lost Arts of the West”.  I gave the students an assignment to learn skills characteristic of earlier days such as blacksmithing or spinning wool, sewing on a treadle machine, milking cows and hand churning butter.  One of the projects required that students spend a day at the ranch doing hands-on exercises with people who could demonstrate some of these old arts. Many of the parents came along, and David and Lurton Scott were among them.

David was a regular guy with an inquisitive curiosity about everything.  That day at the ranch he acted as if he was as interested in those events as he was about space exploration.  He was very easy to get to know, and by the end of the day we had already made plans for them to come back for one of Nancy’s home cooked dinners.  I remember that he asked if he could bring his hunting rifle along. He had been invited to participate in a special antelope hunt the following fall in Wyoming and needed to sight it in. Right away I knew he was my type of guy.

A couple of weeks later the Scotts showed up and David did have his rifle in hand.  We spent the afternoon shooting targets and enjoying a beautiful California day together.

Recently while going through some old files, I came upon the thank you note that Lurton had handwritten us.  I had kept it because it was written on a card with a picture David took while on the moon.

A few years later the Scotts were transferred to another base, but I’ll never forget the opportunity we had to get to know such amazing people. Looking back, I feel very thankful to have spent quality time with a person like Dave. I’d have to say it was more than a chance encounter.  I realize now that it wasn’t about space exploration or even rubbing elbows with a famous person; it had more to do with what God wanted for my life.  Meeting Dave gave me not only a desire to do more with my life but also not to simply live the status quo day to day existence. Dave modeled what a true hero is to me. Not because he took careless chances, but because he had a sense of purpose for a greater cause than himself.  He wanted his life to count and he was willing to sacrifice and take some risks to do it.

In later years I chose to leave behind security and status quo to join what I felt was the greatest cause the world has ever known.  I decided to invest my life in an endeavor to impact humanity with the cause of Christ. It would be a life that would take me to nearly every continent, deep into remote jungles and onto distant islands.  It would take me to the enemy lines of ethnic cleansing and among some of the poorest and most desperate people on earth. God would use me to motivate others to leave their comfort zones to share in the heart of Jesus for broken humanity.  To do this I would need to capture something that only a guy like Dave could give.  I would have to embrace the courage to turn away from a life of security; not taking risks for the sake of an adrenalin rush, but instead for the sake of others.  Knowing Dave for the short time I did, I recognized his humility and how he could enjoy the company of a regular guy like me.  He was a real person, not a superman, but a natural man who made a choice to go for it.  I wanted that quality for myself.

Gazing at the moon that evening reminded me again to give thanks, not only for the influence the Scott family had on my life, but for all the amazing people God has placed in my path.  All those who have helped me become the person I am today.  Marveling at the descending moon I am thankful to the Lord who has blessed my life through many rich and meaningful relationships.

Sighting in our rifles on the old ranch in 1973