A conversation with the UPS man – Entry #87 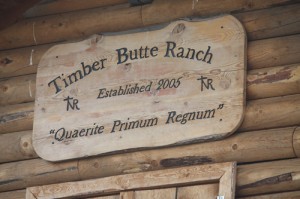 We had a new UPS driver today deliver a package that I had ordered.   As I was walking up to his truck I noticed him looking at the barn and he asked me what the Latin words meant that were inscribed on the bottom of our sign. I told him its translation meant “Seeking first the Kingdom”.  Looking a bit puzzled he asked me what the Kingdom was.   I said it was the Kingdom of God, and for us it meant letting Jesus become the Lord of our lives.  He wanted to know more so I went on to explain that living in the Kingdom meant not only discovering who God is but also seeking His righteousness and living your life for Him. I went on to say that in doing so God ends up blessing your life in many ways.  For example,  living here on Timber Butte had been a real miracle for us. I told him that there was no way we could have made this happen on our own.

I asked him if he ever saw the movie “Lonesome Dove“.  He said he had.   Then I asked, “Remember the sign Gus had nailed on the front gate of their ranch and how he had written a few Latin words on it?”  – I told him that was what gave Tri the idea to put Latin on our barn sign.  Gus didn’t know what his Latin words meant but he said they made him feel educated.  Tri put Latin on our barn sign to remind us to always put God first.

Our new UPS driver gave me a genuine smile and said that it sounded good to him.  As he was driving away I prayed for him and asked the Lord to take our short conversation and make it reality.

You never know how God will use your words to plant seeds of truth in someone.  If I go out and intentionally share my faith it somehow always seems awkward.  I love it when it happens as naturally as it did with our UPS man.  I call that being naturally – supernatural; leaving the outcome of simple heartfelt words up to God.    Later Tri told me that as the UPS man passed him down by the front gate he gave him a big friendly wave and smile.

I love the amplified version of the scripture Tri used on our barn –  ”…But seek (aim at and strive after) first of all His kingdom and His righteousness (His way of doing and being right), and then all these things taken together will be given you besides. [Matthew 6:33]