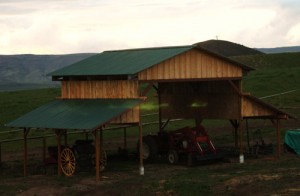 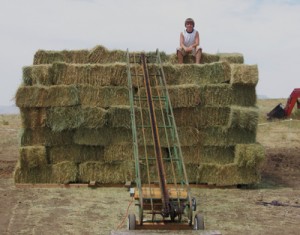 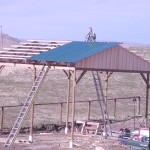 After stacking hay from last summer’s haying season it didn’t take long to realize how beneficial it would be to construct a shed to protect it.  Throughout the fall and winter months we covered the haystack with tarps trying to protect it from the pounding rain and snow storms that were nearly always accompanied by extreme high winds.  As hard as I tried it was a great struggle to keep the hay covered in winds that sometimes exceeded 40 to 60 miles an hour. It was especially difficult when I had to get into it at feeding time.  This country is so open and exposed to the elements that there’s little to slow down the microburst winds that periodically roar through.  Not only did we need tall pole structure, but it had to be built strong.  Hay sheds are tall, open walled structures built on stilt-like poles designed specifically for air flow to avoid mildew.

Visiting with neighbors that had experience with such structures (some of which who had lived in the area for generations), I learned what to do and what not to do.  One neighbor told me he lost three different shed roofs to high winds before learning the secret of success.  Taking note of his counsel and my own past experience I set out to build my stilted structure as strong as possible with materials that were affordable for us.  Here are a few principles I think might be worth keeping in mind if you’re considering such a venture:

So far the new structure has held up to over 60 MPH winds and we pray will stay standing and serve us here at Timber Butte for years to come.