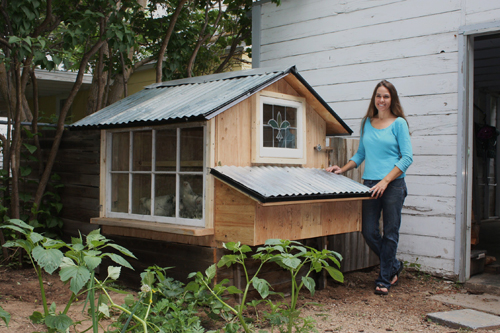 For a long time our daughter Kate has wanted to raise a few laying hens in her back yard.  Up until last week she’s had two obstacles keeping her from her goal, the first being that she didn’t have any chickens, and second, she didn’t have a place to keep them.  We had discussed the possibility of building her a chicken coop, but because she didn’t have an urgent need it never seemed to happen.  When a neighbor across the street decided to rid herself of a half dozen young hens Kate called asking if we would help her build a coop.

Last Saturday the two of us spent the entire day working in my barn building a chicken house that could be dismantled and easily reassembled in her back yard.  Using a few odds and ends lying around we managed to build it for about $100.  It turned out great so I thought I’d share how we did it with you.

We constructed each wall individually on saw horses inside the barn due to inclement weather.  The coop was small but very adequate for Kate’s needs.  When it was complete it was four feet by four feet with a peaked roof that made it stand about five feet high.  We decided to build it on stilts one foot off the ground with a wire mesh floor so that she could easily rake the manure out from under it into her compost pile.  The coop was to be located right next to her vegetable garden. 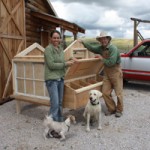 The first wall had an old small-pane window framed into it which had been sitting in my storage pile for several years waiting for a good excuse to be used.  We built four laying boxes into the second wall with an exterior lid allowing Kate to remove eggs easily from outside.  To add a little flair Nancy donated a small stain glass window she had been saving which we incorporated into this wall as well.

We built a double door system into the third wall.  Cutting a smaller door into the larger door gave both the hens and Kate access inside. One small secret I have discovered that has been  helpful when trying to hang small plywood doors like these is to make the cut on the hinged side of the door and set the hinges before cutting the rest of the door out.  In this way the doors will open and close perfectly after the door is fully cut out. 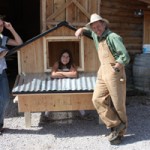 Using some left over corrugated roofing we not only covered the plywood roof, but the laying boxes as well.  Hope, our granddaughter, thought this might make a good place for her to entertain her friends, but after describing the layer of chicken manure that would soon be present she changed her mind.

The next day was Sunday and just happened to be Father’s Day so after church we all assembled at her home.  Kate cooked a wonderful turkey dinner after which her granddad and I helped her reassemble the coop we had prefabricated the day before.  Everything went together perfectly as planned and with the help of my mom and Nancy we used old fencing to build a chicken run and in a matter of about two hours the new little house was ready for its occupants. 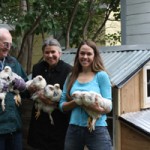 While I made a few finishing touches everyone else went across the street to Kate’s generous neighbors and grabbed arm loads of chickens and our chicken house endeavor was successfully completed with the exception of Kate’s plans to paint it to match her little home.