Entry #59 – The chickens have finally come home to roost 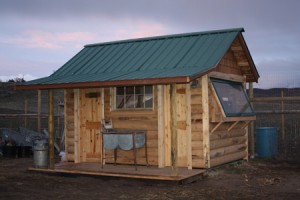 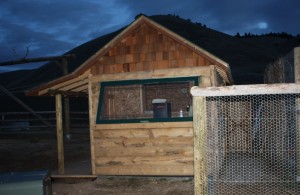 One of my goals for this past winter has been to complete our new chicken coop before the end of March. Most commercial chicken growers here in Idaho hatch their first wave of chicks in time for the first day of spring which was yesterday. I had poured a concrete slab and bolted down the treated 2X4 bottom plate earlier in the fall which had been buried under several feet of snow by Christmas. After some shoveling I started to frame the walls, put on the roof and spiked on log siding that had been left over from the barn. I had sealed the walls and the ceiling inside and out so that they would be protected from the intrusion of mice and bugs. On the south facing side I installed a passive solar window to capture the winter sun and provide warmth runon cold days. Already it has been providing heat for our new batch of Bard Rock chicks that we purchased from some good friends who recently started commercially raising organic chickens. We were excited to get them when we did due to the demand for chickens stimulated by the economic recession. It seems as if a lot of folks are seeing their need to prepare for harder times and are raising chickens in hopes of living more sustainably. Boise’s city ordinances make allowances for people to raise a few chickens in their neighborhood backyards (two hens per family member) as long as their small flock doesn’t include a rooster for obvious reasons. The following pictures will tell the story of the construction of our new coop and the chicks that finally came home to roost.

We started construction in February on a cold but sunny day. Lilly wasn’t much help, but always provides great companionship. 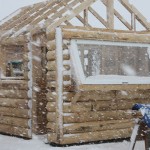 I generally only get about a day a week to do projects here at Timber Butte due to my schedule, so I often get out and work no matter what the weather is like. Even if there is a blizzard going on outside I put on insulated coveralls and try to get stuff done. The day this picture was taken I was having a hard time cutting lumber with my skill saw because the snow was coming down so fast it would cover my pencil line before my saw blade could cut on it. It was a challenge to make decent cuts. 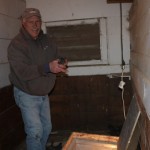 This is Phil McCune our friend who has recently started commercially raising organic chickens and beef with his son. Phil also owns a fencing company but seeing the rising demands for local and natural food production he started this new family business. If you live in the Treasure Valley of Southwestern Idaho and are interested in sustainable living Phil is a great guy to know. His number is 208 – 861-9919. 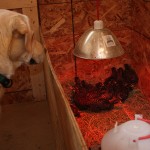 This whole project has made Lilly a bit conflicted. She has a good angel speaking over one shoulder telling her to embrace her sweet nature and welcome her new feathered friends while an evil angel on the other shoulder reminds her that she is a bird dog born to kill.

These Bard Rock chicks are really growing fast. It is amazing how they have feathered out and are becoming free from their dependence from the heat lamp. During the day the passive solar window heats up the inside of the coop to 70 degrees even when the outside temperature is near freezing if the sun is shining.