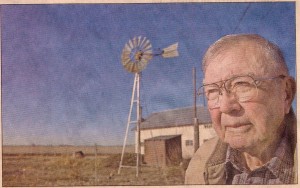 Last Sunday the Idaho Statesman printed a story by Chris Butler on their front page highlighting people who lived through the Great Depression.  It was really an enlightening article that many even living here in Boise may have missed.  Although it hasn’t been my practice to link outside articles on the Timber Butte site I thought this was worth it.  The article was bothinformative and sobering to those who are pursuing sustainable lifestyles. Kent Gist from Fruitland, Idaho was a young boy during the depression; he comments, “If we are in a depression or entering one, they say, at least two societal changes have made us less able to cope with it. One is that we’re more urbanized. Countless farm families survived the Great Depression by growing their own food.

The other change is one of expectations. We’re used to having more, living easier.  Some blamed their generation for shielding later ones from hardship and, as Gist put it, producing “a populace that hasn’t had much experience with adversity.”

Here’s the link for the entire article –