Entry #5 – The barn before the house 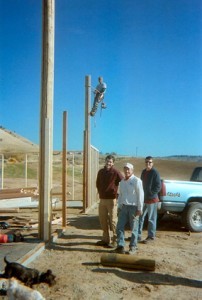 Preparing the poles for the barn 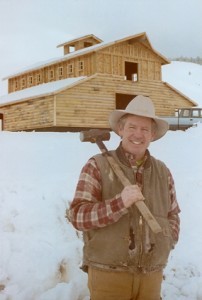 Tri and the barn almost completed in the dead of winter

As soon as the Water, gas and electrical lines were buried Nancy and I staked out the barn on the pad Harvey Church had built for us. Our kids showed up and helped set the main poles and my dad now 90 years old mixed the concrete for the cement block foundation. Every chance I got I would frame what was to become our log sided barn.One of those days our nearest neighbor Judy Daniels showed up to check on progress. She had been observing our progress for weeks from a distance. Judy commented that she could admire and respect people who would build a barn for their animals before building a house for themselves. I took her comments as a great honor coming from someone who had lived in the country for as long as she had.The truth be told, I’d started working on the barn first because it was all we had the finances to do at the time. I would like to think that I had been that thoughtful but circumstances dictated my efforts more than philosophical conviction. One thing I do know however is that God blesses small beginnings and most often honor the efforts of people who are willing to pick up a plumb-bob rather than procrastinating and never doing anything. [Zachariah 4:10]