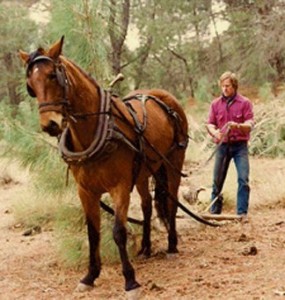 Using Sunday to snake out firewood in 1975 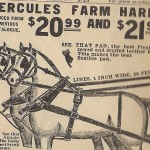 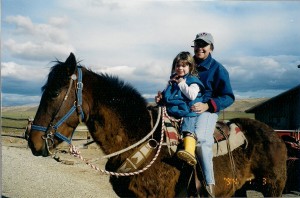 Nancy & Hope riding Sunday when she was in her 30’s 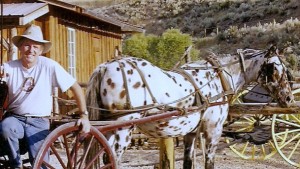 In the summer of 1972 a neighbor showed up at our old ranch and asked if we were interested in buying his yearling filly for $200 dollars.  I knew the horse he was selling and had been watching her grow up in his pasture five miles down the road. I wondered if there was a catch to his offer as we had actually considered buying the filly but the original price was way out of our reach.  After asking why the reduced price, I learned that he had sold her to a rancher who refused to make good on a bounced check.  When confronted, the rancher ran off our neighbor at the point of a shotgun. Our neighbor was told by the local sheriff that repossession was the only way he would get the little filly back.  Being 24 years old I was still young and foolish enough to agree to do the repossession. After a scary venture at two o’clock one morning I became the proud owner of a bay mare that was an important part of the Robinson household for the next 34 years. Her name was Sunday.

Sunday was the second horse we owned, and the first that I was to break and train from scratch.  I started seriously working with her when she was a two-year-old and soon discovered the satisfaction of watching a young horse develop. Actually Sunday was a lot smarter about the process than I was and she made me a success as a horse trainer.  In that first year of training we rode many miles through the surrounding hills.

One day I was going through some old junk in my great-grandfather’s abandoned hog shed and came upon a rusty 55 gallon drum containing two discarded horse collars and sets of harness. Curiously I pulled them all out, untangled and hung them over the top rail of a fence.   I didn’t know much about it, but as far as I could see it appeared to be complete and functionally sound.  Whoever sealed them in the drum must have oiled them so the leather remained pliable after some thirty-five years of storage.  I cleaned them up the best I could and caught Sunday for a fitting.  There were so many straps and buckles that I couldn’t figure out what hooked to what, so I went in the house and dug out an old Sears and Roebuck catalogue dating back to the turn of the century.  It had pages of pictures displaying all kinds of buggy and work harness for horses and mules of every size.  After finding what appeared to resemble my great-grandfather’s harness I studied the picture doing my best to fit my newly found prize on Sunday’s back.  I honestly had no clue what I was doing, but with that old catalogue and Sunday’s easy temperament I finally decided I had it close to right.  I untied her from the hitching post and began to drive her up and down our long dirt driveway walking behind her using the long leather lines to control her.   Soon I allowed the trace chains to drag on the ground ringing and clattering to see how she would react. To my surprise she didn’t even react, she just plodded along as if something inside her told her she was made for this very purpose.  After a while I hooked a single tree to the chains and began pulling light loads; first a wooden fence post, then a tire and finally some old bed springs.  This was to be the beginning of my life-long love for working with horses and harness.

I later found that not every horse was as amiable as Sunday.  I think she was God’s special gift to me to keep me from getting killed in those first days of training.  After years of driving new teams I’ve experienced three dangerous run-a-ways and two rolled wagons, but by God’s grace and mercy I’ve never hurt a horse or a person other than myself.  (These are some wild stories I’ll save for another time.)

Sunday died at a ripe old age of thirty-five – just two winters ago.  In the end she became the first horse my granddaughter rode all by herself and a horse I would use to break many other horses to work as teams.  She was used as a pack horse not only carrying our camps year after year into the back country, but packing out elk and deer meat.   She was one of those animals that loved to please and had a heart to be used.  At seven years old Sunday gave birth to a filly which we named Monday.  Today, Monday is nearly thirty years old herself – and like her mother before her, she has pulled buggies and wagons and blessed our family all her life.

I tell you this story with endearment in my heart and fond memories of another dear old animal friend that deeply enriched all of our lives. She gave us so many adventures but the most vivid memory of all was the day I stood with an ancient Sears and Roebuck catalogue in one hand and some old leather straps in the other, watching Sunday’s lazy eyes role back tolerating my first attempt at using harness.