What I am about to state seems indisputably clear to me as a Bible believing and Bible practicing Christian. After spending the better part of thirty years of my adult life studying and teaching the Old and New Testament, I believe that those who profess Christ as Messiah and call his words and ministry the “Gospel  of  truth” have no other option than to care for suffering humanity and care about the root causes of their suffering.   Denial of the conditions of a world that is escalating in crises is not an option.

It is no mystery that the world’s population has grown at an exponential rate in the last 100 years. In my lifetime alone (a baby boomer born in 1948) the population has tripled from 2.5 to 6.8 billion people. Half of these people (3 billion) are living on less than two dollars a day.  One third of them are starving and another third are suffering from malnutrition.  Extreme poverty like this not only places people in physical jeopardy, but into vulnerable states of desperation.  Desperate people are often forced to do desperate things.  In dire efforts they struggle to feed their hungry families by slashing and burning their forests in attempt to grow food and produce charcoal to heat their homes,  cook their food and as a meager means of commerce.  Rains then erode the land washing precious topsoil into the rivers and oceans resulting in ecological disaster and the inability to produce more food.  This escalates poverty and elevates vulnerability producing hotbeds for such atrocities as human trafficking and child soldering. Each year there are over 800,000 people illegally trafficked across borders, many of which are children who are exploited into the sex slave industry.  Observation tells us that the most effective curb against excessive population growth and extreme poverty is literacy, but sadly one billion people entered the 21stcentury unable to read their own name.    Ironically it would only require less than 1% of the money spent on weapons of war each year to put every child on the planet in school.  The direction in which the world is heading is not sustainable. Something must be done; something has gone horribly amiss. The world needs reformation. 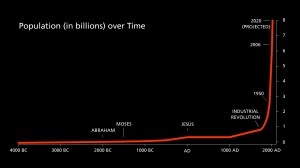 As a Christian I believe in the sanctity of life.  I do not believe in genocide of any kind, either before or after the womb.  I believe that every life is divine and precious to God; therefore I believe that every Christian must be concerned with the environmental crisis that is threatening the wellbeing of our planet.  Today, 80% of all illness and death (especially among infants and children) in developing countries is water related.   Two and a half billion people do not have access to clean drinking water causing the deaths of 2.1 million people every year.   It is easy to deny the reality of climate change (no matter what is causing it) and consequently the potential devastation that will come because of it. For those who sincerely care about the poor and are Biblically called to serve them, there must be an awakening to the impending calamity.  It is the poor who will be impacted first by devastating wave surges in low lying coastal areas such as Bangladesh.  The call to action cannot be postponed as these natural disasters are increasing in frequency and intensity.

There are presently over two billion people that profess to know Jesus and who believe that the Bible is true.  That is one third of the world’s population – a potential massive, worldwide, networked workforce.   If the church would embrace this cause as the compassionate, merciful ministry of Jesus a difference could truly be made.

After spending thirty days in the wilderness Jesus began his three year public ministry. He started by entering his home town of Nazareth and going to the synagogue on the Sabbath.  The attendant in charge that day handed him the book of the prophet Isaiah for a public reading.  Jesus unrolled the scroll to Isaiah 61 where the prophet had proclaimed and recorded eight hundred years before the things that the messiah would do when he came.

“The Spirit of the Lord is upon me,
for he has anointed me to bring Good News to the poor.
He has sent me to proclaim that captives will be released,
that the blind will see,
that the oppressed will be set free,
and that the time of the Lord’s favor has come

After he had finished, he rolled the scroll up, handed it back to the attendant, sat down and said, “The scripture has come true today before your very eyes.”  What he meant was that he was the fulfillment of Isaiah’s prophecy, he was the Christ and Isaiah 61 was his job description.  This infuriated everyone in the room that day, and is still cause for reaction by many today. Despite what some may say, the fact remains that Jesus accepted the ministry to the lost and broken world as his own.  For the next three years he did just that – spending  his time among the devastated, rejected and broken.

An increase in natural disaster

Three years later we find Jesus talking to some of his disciples on a hillside in Jerusalem just before his crucifixion.  This is recorded in Matthew 24.  They asked him about the last days of the earth and what those days would look like.  In response he painted a picture of a world in extreme crises.  He told them there would be an increase of world violence (wars and rumors of wars),  an escalation of natural disasters and a breakdown of social ethics and values.  He described drought, famine and extreme world hunger as well as an increase of plagues, disease and human suffering.   He  went on to say that no one knows when this will happen (“no man knows the time or the hour”),  and that when these things occur  it will be like in the days of Noah when people were in denial trying to maintain life like they always had.  After that he told three parables or stories, all of which were about stewardship.  For example, he told of an unfaithful steward whose master had entrusted him with his estate after announcing he was going away for awhile.   Later the master returned unannounced and unexpected.  and judged the servant based on how well he had taken care of his people and his land.  This is an obvious exhortation and warning to every person that desires to be responsive to God’s heart for humanity.

Right after these parables, Jesus spoke of the final judgment and a time of separation between the wicked and righteous.  It was here that Jesus said those famous words, “Come, you who are blessed by my Father, inherit the Kingdom prepared for you from the creation of the world.  For I was hungry, and you fed me. I was thirsty, and you gave me a drink. I was a stranger, and you invited me into your home.  I was naked, and you gave me clothing. I was sick, and you cared for me. I was in prison, and you visited me.”  The disciples curiously responded by asking Jesus when any of this ever happened to him, and he simply said, “as you (all those who profess him as Lord and savior) do this to the least of humanity, you do it to him.”  Caring for suffering humanity is not only the ministry of Jesus, but it our ministry to Him.  How much more clarity do we need?  If we love God and desire to obediently serve Him we must not only go and serve in this suffering world, but we must do it until the day He returns.  There is no option; there is no way around it. There can be no rationalizing or denying it.  We must pray that we capture the very heart of God so that we will be impassioned for the ministry of Jesus. We must unite around His commission, equip ourselves for His mission and courageously go.