Shocking truths about the use of electric fencing – Entry #83 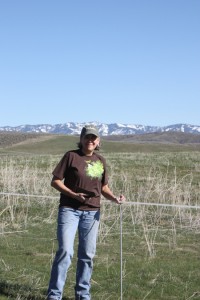 I have never put too much faith in electric stock fencing. It didn’t seem logical that a small wire pulsating a harmless electric jolt could detour a 1000 pound animal that believes grass is always greener on the other side.  Horses we’ve owned through the years have had the uncanny intelligence to master the art of opening tricky gate latches, untying rope knots and having instinctual radar systems capable of locating weak spots in pasture fences.  The thought of a small wire strung on flimsy fiberglass poles having the ability of slowing down an animal like that seemed laughable – until just lately.

As spring has arrived and the rains have stimulated the rapid growth of pasture grasses we have had need of directing stock to places where they can graze without eating fields designated for mowing and bailing. Throughout the 80 acre homestead there are numbers of un-farmable ravines and hillsides that are rich in grass but too rough or steep for the tractor to safely negotiate. These areas haven’t been fenced, nor are they places we want to fence, yet they need to be accessed for grazing a month or two a year. The solution we have discovered is the use of temporary electric fence lines that can be readily moved from area to area at will.

When we first started using electric fencing I tested its jolt by simply gritting my teeth and grabbing it.  I’ll admit I didn’t much like getting zapped, but no matter how shocking it felt I didn’t trust that it was enough to put fear in an animal with a thick hair covered hide.  What I neglected to understand was that my two rubber soled boots insolated me from being as well grounded as a bare four footed animal.  Once a horse or cow touches an electric fence with the tip its big wet nose it generally never wants to touch it again.  I think it scares the poor beast more than hurts it, but for whatever reason, it does make a wonderful and dependable barrier.

Nancy and I enjoy going out on warm spring evenings to string electric fence lines together.  It is not unusual for us to set up to a half mile in an hour or two. We have a system where I hook up the electric charger and grounding rods while she sets posts and strings the wired nylon tape.  It is one of the things we love to do together not only because it gives us a reason to get out of the house and into the fields, but it gives us satisfaction knowing that were opening up new areas for our animals to use.    Electric fences are not only effective and easy to use but they provide a means of moving stock from place to place so that the land can be sustainable and not over grazed.