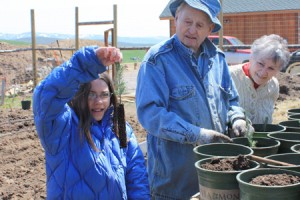 Hope plants a tree with her greatgrandparents

Last weekend we had a family gathering at our ranch and my parents, now in their early nineties, brought a box of sixty pine tree seedlings out to Timber Butte.  They were left over from an Arbor Day tree giveaway at a local home improvement store in Boise. My parents got the seedlings when they promised to make sure they were planted. That day four generations of our family spent a couple of hours planting trees that my parents will most likely never see grow to full maturity. It was a great picture of the vision and foresight that our world is in dire need of right now.

I fear for the future of the United States and because of it, I fear for the future of humanity in general. I believe the world is in real trouble and America, a nation that has provided stability for so long, plays a part in that concern as it is currently being shaken at the core of its foundation.  There are three pillars of sustainability: environment, economy, and society. It is a known fact that if any of those pillars collapse, so goes the civilization they support.

History has a way of repeating itself; tragically society has not heeded the warning of past mistakes in the decision- making of the present while planning for the outcome of the future.  Leaders often become short- sighted when they are faced with the ground rush of crisis that forces short (four or eight year) term solutions. When someone is dying of arterial bleeding the long term diet and exercise program becomes irrelevant. We, like that person, are living in a season of arterial bleeding, and because of it we are placing future generations in jeopardy. All three of our nation’s pillars are being violently shaken. In an effort to shore up the environmental and economic pillars the social pillar is crumbling before our eyes.

Whether you believe in the Bible or not I can assure you that it provides the most concise historical narrative of a nation that has lost its way. Every American who cares about the future of this nation should read 1st and 2nd Kings along with 1st and 2nd Chronicles. Old Testament Israel fought for its sovereignty because of a deep God-given conviction for the freedom of religion. Under the rule of King David Israel was established as “one nation under God” and became both economically strong and militarily powerful. The people were socially united in values and purpose as the kingdom was handed off to David’s son Solomon. Solomon was young but considered very wise. He began his reign in humility, but as the country became even more powerful and affluent he became arrogant and started to lose his way. Although he went through the motions of maintaining the social pillar of faith by building a massive temple, Solomon lacked personal conviction. The social values that established Israel through the original leadership lost sincerity and they began to fade. As Solomon handed the nation on to his son Rehoboam the social pillar started to weaken further and the nation became divided over issues of ideology and ethics. The new generation now reinterpreted the heart that established the Davidic kingdom and partisan division weakened their united stand eventually breaking the kingdom in two. As the social pillar collapsed so did their economic strength and the pillar of their physical environment weakened due to the constant overuse and abuse of it. In the end this would be the Biblically stated reason Israel was taken into seventy years of captivity and bondage (See 2 Chronicles 36:21).

Israel started to suffer and became weaker with each generation until the northern division was eventually lost to their enemy the Assyrians.  Because the southern division of Judea maintained Israel’s social pillar (based on a united belief system) they remained intact much longer even against constant threats and schemes of their enemies up until the reign of King Hezekiah. For the most part Hezekiah was a good king. He did some good things and was admired by his people. But Hezekiah suffered from arrogance as well – believing his kingdom was more powerful than it truly was. Based on this erroneous belief, he established a superficial political relationship with the Babylonians. He made an alliance with a nation that was really his enemy, thinking he could control them. This was the finishing blow to a nation that was once great and mighty.

One of the most tragic elements of Hezekiah’s reign revealed why Israel finally failed. It happened when the prophet Isaiah delivered a word from God to Hezekiah. This is recorded in 2 Kings 20:16-19. “Then Isaiah said to Hezekiah, “Listen to this message from the Lord: The time is coming when everything in your palace-all the treasures stored up by your ancestors until now-will be carried off to Babylon. Nothing will be left, says the Lord. Some of your very own sons will be taken away into exile. They will become eunuchs who will serve in the palace of Babylon’s king.” Then Hezekiah said to Isaiah, “This message you have given me from the Lord is good.” For the king was thinking, “At least there will be peace and security during my lifetime.”

Hezekiah was not thinking about the sustainability of future generations. His thought was for the moment – for his time of leadership. Like so many leaders today, he was thinking short term, about holding things together during his reign. This is the very issue that concerns me today – the very issue that I believe may well cause the long term collapse of our three pillars of sustainability in America.